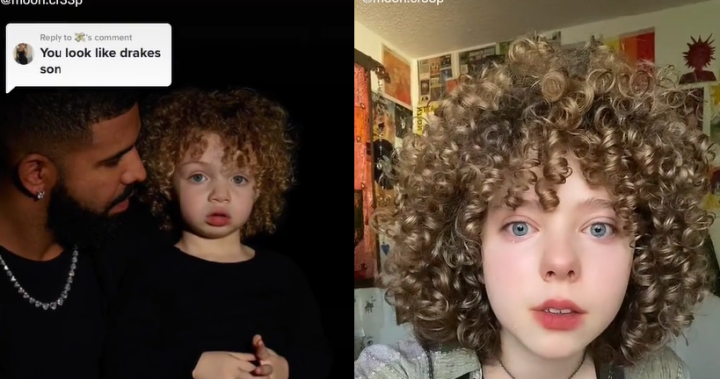 An Edmonton youth has become a TikTok star of sorts after being compared to Canadian rapper Drake’s son, Adonis Graham.

Someone pointed out that Yemaya Azinia-Merchant bears a striking resemblance to Drake’s young son and the photos comparing the two spread quickly across the social media platform. As of Friday, it had more than 1.2 million views since being posted on Wednesday.

In fact, their similarities even caught the attention of Drake himself.

The 15-year-old says having a famous doppelganger has been a wild ride.

“I downloaded TikTok a week ago and I made a video that got maybe 50,000 likes, and then I made this one replying to a comment on that video and it blew up.”

“I didn’t even know Drake had a son, so I didn’t know I looked like this son because I didn’t even know he existed until someone commented,” said Azinia-Merchant. “But when my sister showed me the photo, I was like, that’s kind of crazy.”

Azinia-Merchant is a fan of Drake’s music, and when he, along with fellow rapper Lil Yachty, spotted their video, it was an amazing feeling.

“I just started shaking, I was going crazy, screaming, ‘they actually saw the video?’ It was just really crazy because you don’t think something like that will happen in such a short time because I downloaded TikTok a week ago and for someone like Lil Yacty and Drake to have seen the video is surreal. It just feels awesome.

“I listen to his music. When God’s Plan came out, I was crazy about that song. Our school had a rap battle and the teachers did it and after that, I was just dedicated to that song for a while.”

Azinia-Merchant is a budding filmmaker and hopes this boost to their TikTok following helps build a future career.

“I’ve been wanting to grow a TikTok following because I do stuff in the entertainment industry with film, so I thought this was a good way to promote that and build a bigger following. You always have TikToks that have millions of likes and millions of views and you just think — oh what would that be like to be on the other side.”

Azinia-Merchant is excited for what may evolve from this glimmer of internet fame and has a tongue-in-cheek message for Drake.

“Since I look like your kid, I would love to get some child support going on.”