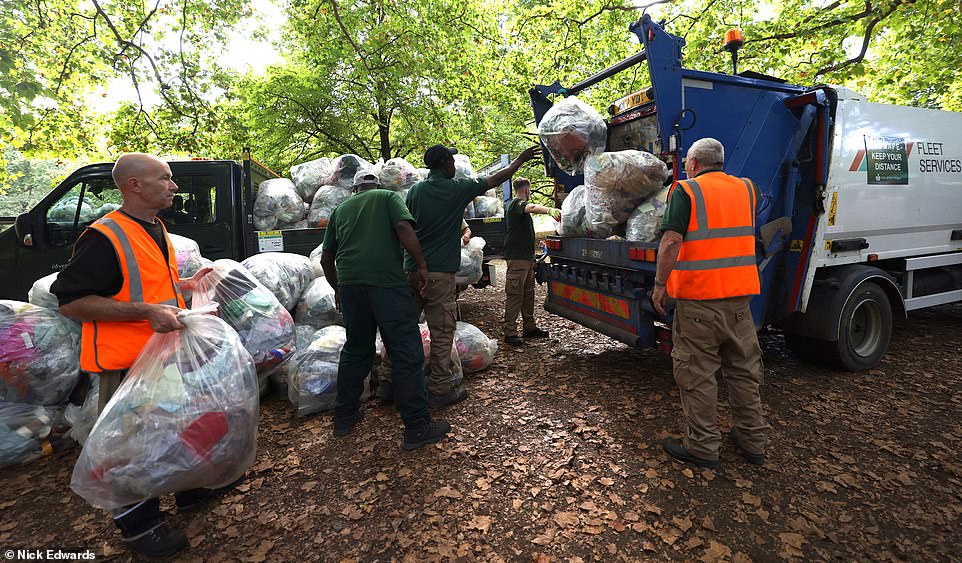 By Elly Blake For Mailonline

A clean-up operation to remove plastic wrappings from floral tributes being laid for the late monarch is underway at Green Park in central London.

Workers could be seen removing the plastic packaging from the flowers as dozens of bin bags full of cellophane were bundled onto lorries by workers to be taken away on Monday afternoon.

The wrappings are being taken to a mixed recycling centre where any recyclable material will be separated out and recycled.

Royal Parks staff and contractors are ‘working around the clock’ to keep the park ‘looking its best’ for the thousands of people that arrive every day to pay their respects to Queen Elizabeth II, who died ‘peacefully’ at her Balmoral estate on September 8, aged 96.

It comes as the Royal Parks, which manages the official site for tributes in Green Park, asked mourners to only ‘lay organic or compostable material’ and remove any wrapping from the bouquets being left.

They also said that while people could bring teddies and soft toys if they wanted to, they would ‘prefer that they didn’t’ for sustainability reasons.

Volunteers have been helping to remove the plastic wrappings from floral tributes laid for the late monarch who died just after 6.30pm on Thursday, September 8

It is concerned about the waste involved in disposing of non-organic items such as plastic packaging left by well-meaning mourners.

The charity said its ‘priority at the moment’ was to manage the huge volume of flowers and tributes being left in the Green Park Floral Tribute Garden.

The tributes will be left on site until all ceremonial activity has taken place.

It is expected that flowers will be removed from park areas from seven to 14 days after the date of the funeral.

Flowers that have deteriorated will be removed throughout and taken away for processing to prepare them for composting.

Writing on its website, the charity said: ‘In the interests of sustainability, we ask visitors to only lay organic or compostable material.

‘The public will be asked to remove all wrapping from floral tributes and place these in the bins provided.

‘Removing the wrapping will aid the longevity of the flowers and will assist in subsequent composting which will start between one week and a fortnight after the date of the funeral.’

The Royal Parks has said that it is not ‘stopping people from leaving teddies or other artefacts, we would just prefer that they didn’t for reasons of sustainability’

Meanwhile, the Royal Parks said it is not preventing people from leaving ‘small artefacts’ such as soft toys and teddy bears if they wish, but ‘would prefer’ people to leave floral tributes with their plastic wrapping removed.

They continued: ‘We would prefer visitors not to bring non-floral objects/artefacts such as teddy bears or balloons.

‘Cards and labels will, however, be accepted and will be periodically removed by The Royal Parks’ staff and contractors for storage offsite.’

‘This process will be carried out with discretion and sensitivity.’

However, mourners are being urged not to leave marmalade sandwiches due to the wildlife in the parks after the food was left in a nod to the Queen’s association with Paddington Bear.

A spokesperson for the Royal Parks said: ‘We’re not stopping people from leaving teddies or other artefacts, we would just prefer that they didn’t for reasons of sustainability.

‘The flowers themselves will be removed from the Floral Tribute Garden 7-14 days after the funeral and will be composted in Kensington Gardens, with the compost then being used on shrubberies and landscaping projects across the Royal Parks.’

Plastic packaging and cellophane has been bundled into bags to be taken away from the Green Park Floral Tribute Garden. Pictured: A volunteer helping on Monday