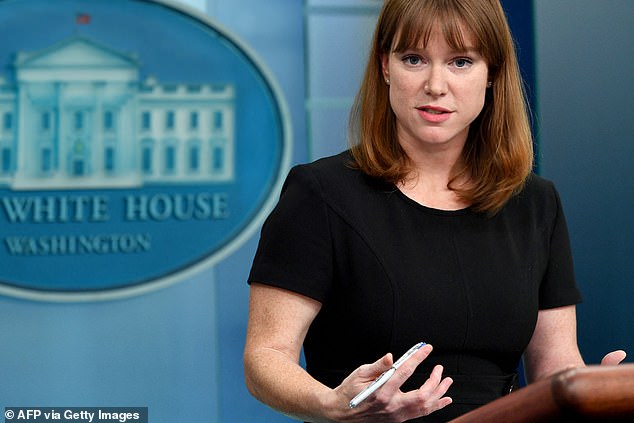 White House communications director decides to STAY following exodus: Kate Bedingfield does a u-turn on what was meant to be her last day after pleas from the President

In a turnaround for a White House that has been losing communications aides, White House Communications Director Kate Bedingfield made the surprise announcement Friday that she would remain in her post.

It was to have been her last day on the job, and the White House had already released a statement earlier this month lauding the longtime Biden aide.

‘After much thought, discussion and reflection, I’ve decided to stay,’ she wrote colleagues in a note, CNN reported Friday afternoon.

‘I’m not done here and there is so much more good work to do with all of you. I couldn’t be happier and more excited about this awesome — if admittedly last-minute! — development,’ she told them. ‘The work is too important and too energizing and I have a lot of gas left in the tank.’

NOT GOING ANYWHERE: White House Communications Director Kate Bedingfield told colleagues she would remain in her post on what was supposed to be her last day

She was supposed to wrap up her work Friday, but stayed longer after Biden tested positive for the coronavirus.

She remains in a shop that has seen a slew of departures, including Press Secretary Jen Psaki.

The White House has seen the return of longtime advisor Anita Dunn, as President Biden battles low approval ratings and seeks to get remaining pieces of his legislative agenda through Congress.

Bedingfield herself has done some stints at the podium, successfully batting away reporters’ questions when she had to stand in for Psaki, prompting chatter at one point that she herself could assume the role.

Republicans have been hammering Biden on inflation and the economy, which this week according to government statistics was in its second consecutive quarter of negative growth.

Democrats got stunning news this week when Sen. Joe Manchin reached a deal with Majority Leader Charles Schumer on a package that would spend billions on climate programs. If enacted the deal would resurrect major elements of Biden’s agenda.