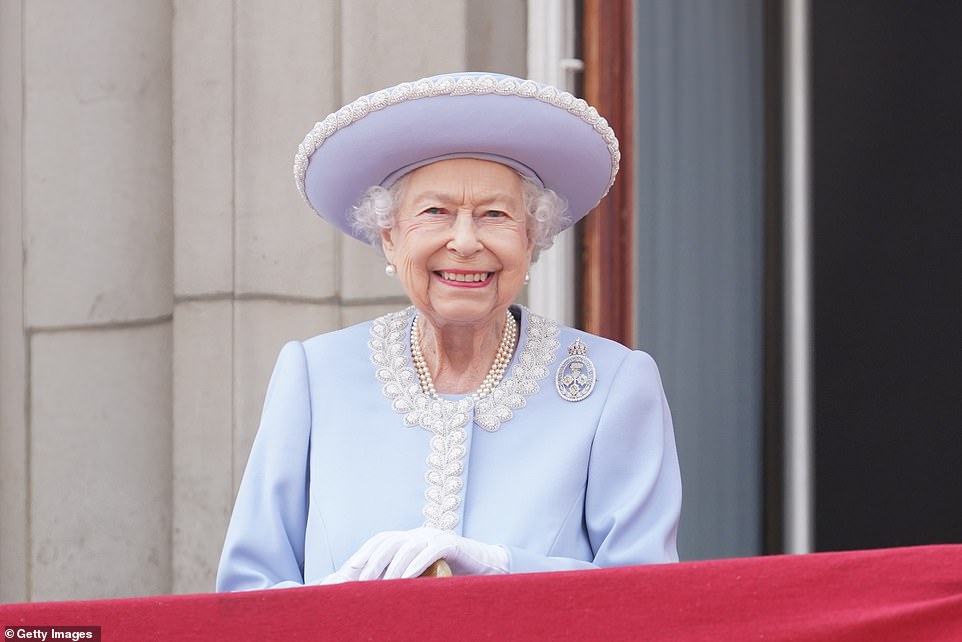 More than one million mourning Britons will say their final goodbyes to Queen Elizabeth II as her coffin lies in state in Scotland and London this week.

Her Majesty’s coffin will lie in rest at St Giles’ Cathedral in Edinburgh for 24 hours, beginning Monday at 5pm. Those wishing to pay their respects can turn up at the church.

Officials say a queuing system and security checks will be in place. Mourners should expect to stand in the queue for a number of hours. Mobile phone use will be restricted and photography and recording will be strictly prohibited.

Members of the Royal Family, including King Charles III, will guard the coffin as it lies in state from 7.20pm in a tradition known as the Vigil of the Princes.

Brits can also visit the Queen at Westminster Hall in London beginning on Wednesday. Her Majesty will lie in state for ‘four clear days’ in Westminster Hall until the morning of her funeral on Monday, September 19.

Her coffin will be under continuous vigil and mourners can visit any time during daylight hours.

Police and Whitehall sources say specific details on how to attend will be released in the coming days, but visitation is expected to be on a first come, first served basis.

Queen Elizabeth, aged 96, died peacefully at her beloved Scottish residence on Thursday surrounded by her family.

Her death sparked an immediate and huge outpouring of emotion, with thousands of mourners gathering outside the gates of Buckingham Palace and Windsor Castle to leave flowers and displays of well-wishes for the Royal Family.

Queen Elizabeth II’s casket will lie in state for 24 hours at St Giles’ Cathedral in Edinburgh. Officials are pictured outside the church on Saturday as they prepared for the procession transporting her body

Her Majesty will lie in state for ‘four clear days’ in Westminster Hall (pictured on Thursday) until the morning of her funeral on Monday, September 19. Members of the public will be able to see the coffin as it lies in state

Soldiers will guard the coffin around the clock during visitation. Members of the Royal Family are also expected to take turns standing guard, a tradition known as the Vigil of the Princes. Princes Edward and Charles (pictured) both guarded the Queen Mother’s coffin in 2002

Police prepare the streets on the Royal Mile in Edinburgh on Sunday, ahead of the arrival of the coffin of Her Majesty, Queen Elizabeth II

The Queen’s coffin – which is lying in the ballroom at Balmoral Castle – will be taken by road to the Palace of Holyroodhouse in Edinburgh this morning, on a six-hour journey by hearse, covering 175 miles.

The procession will travel from Balmoral to Aberdeen on the A93 and is expected to reach Ballater for a tribute in Aberdeenshire around 10.12am today.

The tribute will be attended by the Lord Lieutenants of Aberdeenshire, as well as senior officers and councillors. According to The Telegraph, best viewing locations will be on pavement areas in in Aboyne, Banchory and Drumoak.

The cortege will then Aberdeen at around 11am. Another tribute – led by the Lord Provost of Aberdeen and other civic dignitaries – will take place at Great Southern Road by Duthie Park. The public is invited to pay their respects at the ceremony or on a footpath along the procession route.

The cortege will then follow the A90 to Dundee, arriving around 2pm for another tribute. Civic dignitaries from Tayside and Fife will stand on a dais as the cortege leaves the city.

Scottish First Minister Nicola Sturgeon said the ‘poignant’ journey would give the public a chance to come together to ‘mark our country’s shared loss’.

Well-wishers are expected to gather along the route and Ms Sturgeon and other party leaders in Scotland are expected to watch the coffin as it goes past the Scottish Parliament.

People wait for the hearse carrying the body of Britain’s late Queen Elizabeth II on its way to Edinburgh, in Balmoral, Scotland

A visitor leaves a floral tribute at the Palace of Holyroodhouse for the late Queen Elizabeth II on September 11, 2022 in Edinburgh, Scotland

The coffin will be taken to St Giles’ Cathedral where it will lie in rest until Tuesday. Mourners will be able to begin viewing the coffin around 5pm Monday, the City of Edinburgh Council confirmed to Edinburgh Evening News.

Visitors will go through an official queuing system that will feature security checks.

King Charles will stand beside the coffin from 7.20pm as part of the Vigil of the Princes – a longstanding tradition where male members of the Royal Family stand guard as their relatives lie in state. Prince Edward and Charles both guarded the Queen Mother’s coffin in 2002.

After lying in state for 24 hours, Her Majesty’s coffin will then be flown from Edinburgh to RAF Northolt on Tuesday, accompanied by her daughter Princess Anne. The casket will then be driven to Buckingham Palace on Wednesday ahead of a processional through the streets on London to Westminster Hall, where it will lie in state until the morning of the funeral.

A million mourners – included several foreign dignitaries – are expected to visit the coffin while it is lying-in-state and officials estimate two million people will gather in the streets every day until Her Majesty is laid to rest.

‘We will open the queue and control it through the normal way,’ a senior Whitehall source told The Sunday Times. ‘It is like trying to organise something on a similar scale to the London Olympics in a matter of days.’

A police source echoed: ‘It will be like the Notting Hill carnival every day.’

Nadhim Zahawi, the chancellor of the duchy of Lancaster, is reportedly chairing daily meetings to oversee the viewings as officials try to ensure ‘as many people as possible’ can see the Queen.

Soldiers will guard the coffin around the clock during visitation. Members of the Royal Family are also expected to take turns standing guard.

The Queen’s coffin – which is lying in the Ballroom at Balmoral Castle – will be taken by road to the Palace of Holyroodhouse in Edinburgh on Sunday September 11, on a six-hour journey by hearse

After the ceremonies in Edinburgh, the coffin will be flown to RAF Northolt and from there will be taken by road to Buckingham Palace

When her coffin arrives in Edinburgh it will be taken to the Palace of Holyroodhouse, the official residence of Her Majesty The Queen in Scotland, before a service is held at St Giles’ Cathedral on Tuesday

King Charles will lead the nation in mourning on Monday as he walks at the head of a procession of the Queen’s coffin through the streets of Edinburgh.

He will be at the front of the royal party heading from the Palace of Holyroodhouse in Edinburgh and up the Royal Mile to St Giles’ Cathedral, it has been announced.

The King and Queen Consort will fly to Edinburgh with Prince William and other members of the Royal Family to lead the procession. Some members of the family will follow in cars, with others walking.

The Queen’s children and Vice-Admiral Sir Tim Laurence will join King Charles in the the procession in Scotland.

A spokesperson confirmed that Charles is still in ‘discussions’ about arrangements for his mother’s state funeral.

‘I think what the family are genuinely focusing on is the death of Her Majesty the Queen and are united on that,’ the spokesman told the Times. ‘They are trying to get through this period by honouring the Queen as best as possible.’

Prime Minister Liz Truss will also accompany the King on a tour around Britain this week.

People line the street waiting for the funeral cortege carrying Britain’s Queen Elizabeth in the village of Ballater, near Balmoral, Scotland, on Sunday

Prince Harry,the Duchess of Sussex, Prince William and Princess Kate look at floral tributes laid by members of the public on the Long walk at Windsor Castle on Saturday

A view of floral tributes left outside Buckingham Palace on Saturday

Officers from the Household Cavalry stand in vigil at the coffin of Britain’s Queen Mother as it lies in state April 5, 2002 in Westminster Hall

The man in charge of the huge funeral operation, the Earl Marshall the Duke of Norfolk, said the King’s main focus will be leading the royal family and nation in mourning over the coming days.

‘Whilst, in the next few days, the King will carry out all the necessary state duties, his main focus will be leading the Royal Family, the nation, the Realms and the Commonwealth in mourning Her Majesty The Queen. This will include meeting members of the public, to share in their grief,’ he told Mail Online on Saturday.

The Duke of Norfolk said he and other staff were carrying out their task ‘with a heavy heart’.

He said: ‘As the person with overall responsibility for delivering the funeral, let me end by saying that, together with so many colleagues from within The Royal Household, the Armed Forces, the Police, and other institutions of Church and State, we will carry out our duty over the coming days with the heaviest of hearts.

‘But also, with the firmest of resolve to ensure a fitting farewell to one of the defining figures of our times; a monarch whom we were truly privileged to have had as the Head of State of our country and the Realms, and Head of the wider Commonwealth.

‘While His Majesty The King was speaking about his family, I think it applies to us all when he said in his broadcast yesterday that: ‘We owe her the most heartfelt debt.’ I think we can, in some way, repay that debt by carrying out her last wishes in delivering Her Majesty The Queen’s Funeral.’