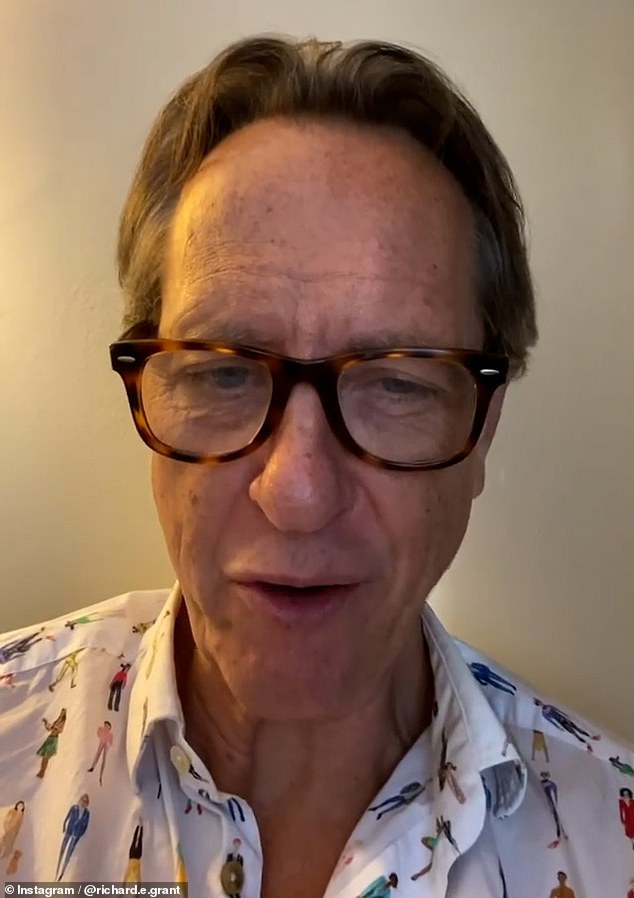 We’re not responsible for the state of Richard E. Grant’s fish and chips! Minister blasts complaining Withnail and I star after he posted video saying he felt ‘punished’ in £228-per-night UK quarantine hotel with ‘grim food’

Actor Richard E. Grant’s complaints about the poor quality of food in his quarantine hotel have been dismissed by a Government minister.

The Withnail and I star took to Twitter yesterday to say he felt ‘punished’ at being forced to quarantine for Covid at the Gatwick Holiday Inn – charging over £228 a night with ‘grim food’.

He had been visiting his 90-year-old mother in southern Africa but returned too late after the Government enforced new travel restrictions to fight the Omicron variant.

Mr Malthouse responded: ‘Well, you’d have to take that up with the chefs at the Holiday Inn or wherever it is he’s staying.

‘I’m afraid the Government is responsible for a lot of things but not for the state of his fish and chips on a Friday night!’

Actor Richard E. Grant (pictured) said he feels ‘punished’ after being forced to quarantine for Covid in a hotel that charges more than £228 a night and serves ‘grim food’

Grant posted pictures on Twitter yesterday of a packaged tuna and cucumber sandwich, a sausage casserole and fish and chips, which he said would cost less than £30 to buy elsewhere.

The 64-year-old said he was ‘confounded’ that a non-quarantine Holiday Inn nearby cost £89 including breakfast while he was being charged £228 to quarantine. He asked: ‘How does Gov[ernment] justify this cost to a traveller for “hospitality”… feels punishing!’

Raising the uneven costs during today’s LBC interview, Nick Ferrari asked Mr Malthouse: ‘Why are we facilitating hotels making so much money out of people being stuck in quarantine?’

The minister said: ‘The restrictions on travel are for all our protection as well as the protection of the individual.

‘I did see the reports of Richard trapped in his hotel room and nobody can do anything other than have sympathy for somebody in that situation. I completely understand the drag that it is on people’s daily lives but we’re still dealing with the variations of this pandemic.’

Mr Malthouse added that Britain’s ‘world-leading scientists’ were carrying out tests upon the Omicron virus strain, with results due in two or three weeks’ time.

The actor said: ‘I understand there are security costs in the hotel and you’ve got to pay for two Covid tests, but £228 a day to receive three meals of this very poor standard, in a supposed four-star Holiday Inn hotel, beggars belief’

Grant used to present the hotel review television series Richard E. Grant’s Hotel Secrets. In yesterday’s video, he said: ‘I went to southern Africa to visit my 90-year-old mother and got caught by the red region Covid restrictions.

‘I understand there are security costs in the hotel and you’ve got to pay for two Covid tests, but £228 a day to receive three meals of this very poor standard, in a supposed four-star Holiday Inn hotel, beggars belief.’

A Government spokesman said: ‘The majority of passengers who have used the Managed Quarantine Service have been satisfied with the service.’