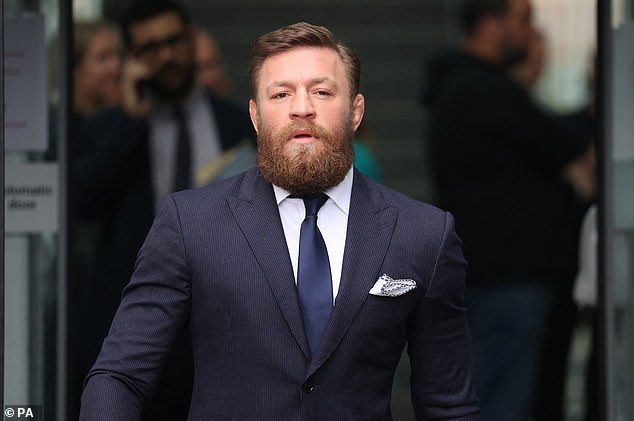 Conor McGregor has been accused of being ‘rattled’ after calling a young cancer survivor a ‘prune head’ during a bizarre rant on social media last night.

The UFC star lashed out at student Sam Sallick after the young American claimed the professional brawler was ‘ageing rapidly’.

Appearing offended by the comment, the 34-year-old former MMA champion fired back in a now-deleted tweet to his nine million-strong army of fans.

In a later post on social media – which was also deleted – the Irishman added: ‘Despite contrary belief, I never fire the first shot in verbal warfare or disrespect. I end it with bombs that obliterate the original comments or remarks but never fire first.’

McGregor’s loyal followers reacted furiously to the Notorious’ tweets, with scores taking aim at the college student from Washington DC.

Sam was left ‘annoyed’ by the bombardment, with McGregor lovers calling him a ‘prune’ and ‘little twerp’, before mocking his appearance, with one saying: ‘You look like you could be anywhere from 15 to 49.’

Sam Sallick, pictured right, was diagnosed with a rare form of cancer in 2019 while at high school in Washington DC

But he also received support online, with one person tweeting: ‘Brotha you made it, this is a win for you,’ and another adding: ‘You rattled him.’

The bullying comments come after Mr Sallick overcame a lengthy battle against a rare form of cancer.

He was diagnosed with Ewing’s sarcoma, a very rare bone cancer affecting about 200 children and young adults in the US every year, in 2019 while at high school.

He faced a grueling 17 rounds of chemotherapy treatment and three surgeries before beating the illness – which. He now proudly calls himself a ‘cancer survivor’ in his Twitter bio.

Sam was diagnosed with Ewing’s sarcoma, a very rare bone cancer affecting about 200 children and young adults in the USA every year, in 2019 while at high school.

McGregor has previously been ‘warned’ by UFC boss Dana White about his online rows, following a spat with Russian prankster, Hasbulla

The online spat is the latest in a string of social media clashes involving McGregor.

Earlier this month the controversial fighter sparked outrage by going after pint-sized internet sensation Hasbulla Magomedov, who suffers from a growth hormone deficiency.

In a similar series of now-deleted tweets, the UFC star went tore into the 99cm-tall prankster from Russia.

McGregor tweeted: ‘I’d love to boot that little gimp Hasbulla over a goal post’, before he labelled him a ‘little smelly inbred’.

It is not clear what has caused the feud between the pair, but Hasbulla is good friends with McGregor’s longtime rival Khabib Nurmagomedov.

Hasbulla, 19, was called a ‘gimp’ and an ‘inbred’ by McGregor during a row over social media earlier this month

Fiery 19-year-old Hasbulla responded to the Irishman by saying he would ‘smash him’ and called for a fight between the pair to be organised.

Hasbulla added: ‘Hey uncle @danawhite and @ufc please make it happen, let me eat this chicken @TheNotoriousMMA. Im hungry, I’ll smash him with my mountain spirit. My brother @TeamKhabib smashed him and all his team, now is my time to rise! #HasbullaTime #CantDeleteMyTweetsConor.’

But McGregor’s comment’s drew concern from UFC boss Dana White, who warned the fighter – who is worth an estimated £171million ($200million) – he might have to ‘watch himself’.

Speaking on My Mom’s Basement podcast, 53-year-old White – who is friends with Hasbulla. said: “Conor better watch himself. If he runs into Hasbulla then he’s gonna be in some big trouble.”