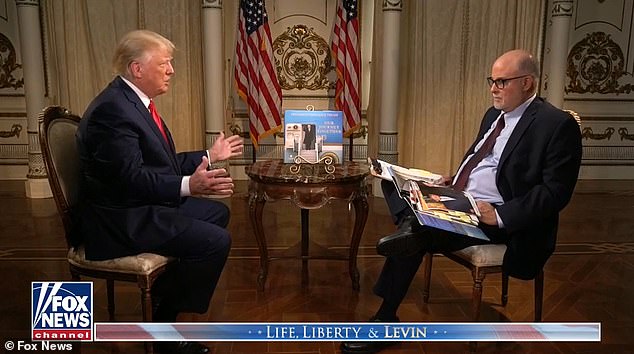 President Trump bragged Sunday night that had he not fired former FBI chief James Comey, he may not have gotten four years in the White House.

‘Don’t forget, I fired Comey. Had I not fired Comey you might not be talking to me right now about a beautiful book about four years in the White House,’ the former president said. He was appearing on Fox News‘ ‘Life, Liberty and Levin’ to talk about his new book, Our Journey Together.

Comey announced in March 2017 that he was investigating the Trump campaign’s ties to Russia. Not two months later, on May 9 of that year, Trump fired Comey.

The FBI rarely discloses its investigations, only when officials believe it is in the public interest. ‘This is one of those circumstances,’ Comey said at the time.

Trump has repeatedly called the investigation into Russian collusion a ‘hoax’ and suggested that Hillary Clinton was behind it.

Later in the interview, he brought up Comey again: ‘I was going to say before, if I didn’t fire Comey, they were looking to take down the President of the United States.’

‘And now those same people said it was the most incredible instinctual moves that they’ve ever seen, because I wouldn’t — I might be here with you, perhaps we’ll be talking about something else. But I don’t think I could have survived if I didn’t fire him, because it was like a hornet’s nest.’

‘Don’t forget, I fired Comey. Had I not fired Comey you might not be talking to me right now about a beautiful book about four years in the White House,’ the former president said

Comey announced in March 2017 that he was investigating the Trump campaign’s ties to Russia. Not two months later, on May 9 of that year, Trump fired Comey

Viewers questioned whether Trump had openly admitted to obstructing justice in the interview. MSNBC producer Steve Benin said: ‘In case anyone’s curious, the statute of limitations for federal obstruction of justice is five years. Trump fired Comey four and a half years ago.’

At the time of Comey’s firing, Trump said that he was acting at the behest of then-Attorney General Jeff Sessions and then-deputy Attorney General Rod Rosenstein to restore ‘public trust and confidence in its [FBI’s] vital law enforcement mission.’

In February 2017, Trump asked Comey to back off from investigating his national security adviser Michael Flynn over his alleged conversations with Russian agents before taking office. Flynn later admitted to lying to the FBI twice about conversations he had with the then-Russian ambassador to the U.S. Sergey Kislyak.

It was Comey’s firing that led to an investigation by special counsel Robert Mueller.

The Mueller investigation ultimately concluded there was no substantial evidence that the Trump campaign conspired with Russia to influence the 2016 election, but did find ten potential areas of obstruction of justice by Trump in his report, without making a recommendation to charge him. His report acknowledged Justice Department guidelines against charging a sitting president.

Mueller’s report found that firing Comey would qualify as obstruction if it had the ‘natural and probable effect of interfering with or impeding’ the investigation.

Attorney General Bill Barr then released his own report finding that the evidence from Mueller’s investigation was ‘not sufficient to establish that the President committed an obstruction-of-justice offense.’

A Justice Department inspector general report found that the FBI under Comey opened the Russia investigation for a legitimate reason and was not motivated by partisan bias when it did so.

Elsewhere in the interview, Trump again sounded off about the investigation.

‘After about five times, I’d say what the hell is going on with Russia?’

Trump again claimed that Clinton’s acolytes ‘made up’ the Russian collusion idea.

‘They made it up, in either her kitchen or a law office. She spent millions of dollars – crooked Hillary did this – gave it to Steele, who’s a nut job.’

Much of the investigation was prompted by the dossier authored by ex-British spy Christopher Steele. Many of the dossier’s claims remain unproven or have been debunked, though the document was cited by the FBI and Special Counsel Robert Mueller in secret warrant applications to spy on a Trump campaign advisor.

Special Counsel John Durham’s investigation led to charges against Igor Danchenko, a Russian-born analyst who was the primary researcher for the document, alleging that he fabricated one source and used a Democratic political operative as another for claims included in Steele’s dossier.