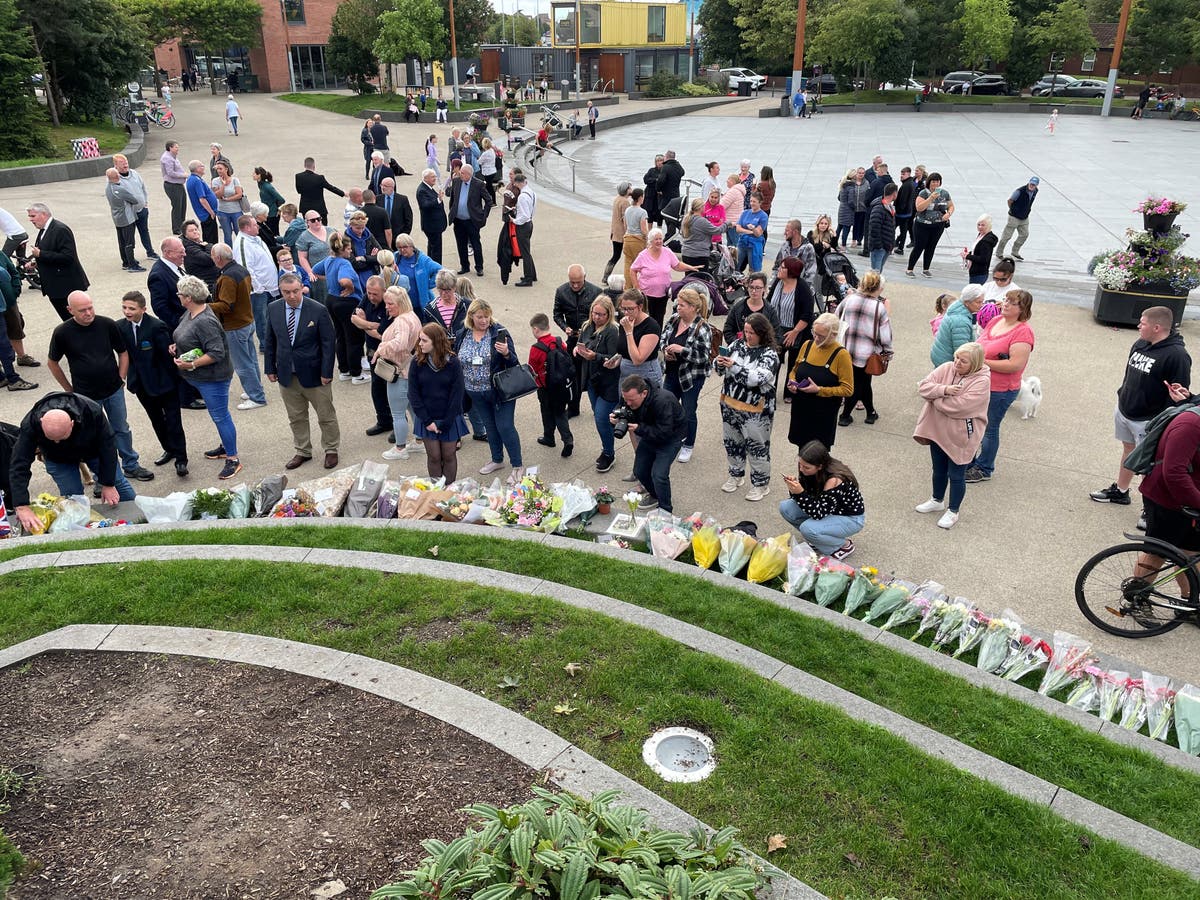 Tears fell and hugs were shared as people gathered at impromptu memorials to the Queen across Northern Ireland on Friday.

A mural erected to mark the Platinum Jubilee on Belfast’s Shankill Road became one of the main focal points for those wanting to pay their respects.

Throughout Friday, a floral carpet below the large wall portrait of a youthful Queen spread out across the pavement.

A more recent image of the late monarch was added early on Friday morning bearing the poignant words “The People’s Queen is Dead”.

On Friday evening, hundreds of people gathered at the Shankill mural as bands assembled to play in tribute to the late monarch.

The first band to perform was the Pride Of Ardoyne flute band who played Abide With Me and the national anthem to applause from the crowd.

Those gathered then sang along to the Shankill Road Sons Of Ulster’s rendition of God Save The King.

Community gardener Stuart Findley has responsibility for the mural’s upkeep.

“I’m completely gutted, nobody expected it,” he said.

“I’m still in a state of shock like everybody else.

“To the Shankill, she’s basically a grandmother and a mother to people.”

Jacqueline Humphries, who has lived on the Shankill all her life, said the Queen had always held a special place in her family.

“She was just the most loveliest person and to me she had a heart of gold,” she said.

“The Shankill is very, very sad. There’s a lot of people that’s really, really hurting by this. I’ve seen people shedding tears that the Queen is away.

“She may not be here anymore, but she’s still in our hearts and we will always remember her.”

Across the city, people gathered at CS Lewis Square in east Belfast for a short service to commemorate the Queen on Friday afternoon.

The King had visited the popular community meeting place, named after of one the area’s most famous sons, some months earlier on one of his regular visits to Northern Ireland.

On Friday, the fanfare of that special day was but a memory as locals congregated for the solemn memorial event before laying flowers below the towering statue of Aslan the lion – the central character in CS Lewis’s Chronicles Of Narnia.

Presbyterian minister Mervyn Gibson addressed the crowd of around 200 people.

“There will be thousands of church services and other memorial events held over the coming days, which will be attended by millions to honour the life of our sovereign, but today we simply come together for a few moments here in east Belfast to comfort one another; to acknowledge that surprising sense of grief we feel for one who we mainly knew through the lens of the media, but yet somehow felt close to,” he said.

Afterwards, he said local people were mourning a monarch they had felt a great personal bond with.

“I think what you see today is a spontaneous display of tribute for Her Majesty in our community of east Belfast expressing their sorrow at her loss,” he said.

“It’s been strange over the last 24 hours that people almost feel a personal sense of loss, that’s the affinity that individuals in east Belfast and right throughout the United Kingdom and Commonwealth had for Her Majesty.

“It’s as if she was part of our family.”