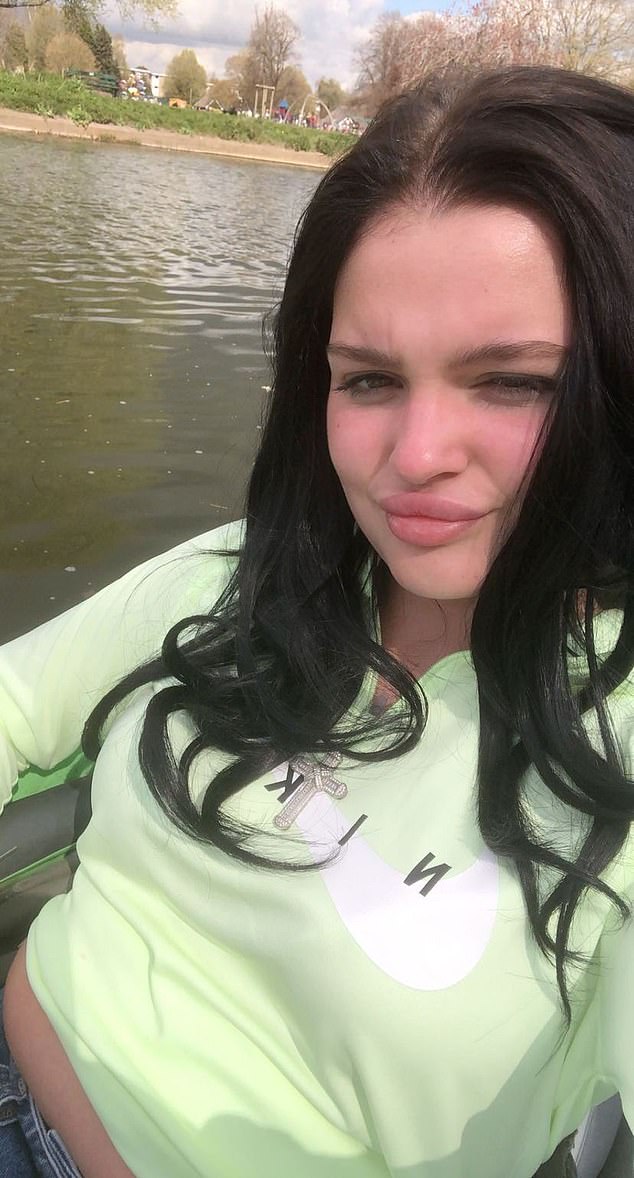 Young people seeking a year-round tan are turning to an illegal nasal spray that can darken skin within hours – even though doctors warn it could cause cancer.

Cowboy companies are specifically targeting teenagers by selling the unregulated sprays in flavours such as bubblegum, watermelon and kiwi fruit, while reality stars and other influencers sing their praises across social media.

But skin specialists say the artificial hormone they contain, called melanotan, could lead to malignant melanoma, a serious form of cancer responsible for about 2,300 deaths in the UK every year.

Among 74 reported side effects are headaches, nausea and kidney damage.

AFTER: Ms Morey admits she is ‘addicted’ to tanning and promotes the nasal sprays to her 14,000 TikTok followers in exchange for free products

Yet the spray, sold under brand names such as Turbo Tan and Mellow Tan, is widely available online for as little as £9.

Dr Emma Wedgeworth, a consultant dermatologist with the British Skin Foundation, told The Mail on Sunday that nasal tanning sprays could lead to fatal skin cancer by overstimulating cells that produce the skin-darkening pigment melanin.

She said: ‘This could increase the risk of the most deadly type of skin cancer – melanoma. This has been reported with the use of melanotan, alongside dramatic changes in skin moles.’

Dr Sophie Shotter, who runs a mole-scanning service at her Kent clinic, added: ‘It’s scary that something that has had absolutely no testing, is unregulated and unlicensed, has side effects and stimulates a cell that we know is responsible for one of the most dangerous types of cancer, is being sold illegally.

‘It is so worrying that it is everywhere, especially on TikTok. None of the companies selling these products has to pay for advertising because these people on TikTok are showing off the product for free.’

Influencers on the social media platform promote the spray as a harmless tan-enhancer.

Influencers on the social media platform promote the spray as a harmless tan-enhancer.

Bethan Kershaw, who appears in the MTV reality show Geordie Shore, told her 700,000 followers that she had used sprays from a company called Real Tan, while social media influencer Georgia Fox showed her 84,000 followers a video of herself inhaling it, saying: ‘A nasal spray a day keeps the paleness away.’

Melanotan is a synthetic hormone originally developed to treat erectile and female sexual dysfunction, but rogue beauty businesses noticed it resulted in a quick tan and began marketing the product as a tanning aid.

After inhaling the spray, users go out into the sun or under a sunbed to ‘activate’ it.

A Mail on Sunday reporter ordered a 10mg vial of melanotan nasal spray from the website Puretan in just few clicks.

Nowhere were the health risks mentioned – and, in fact, the company falsely hailed the substance as possibly helping to prevent skin cancer.

Parris Morey, a 19-year-old waitress from Coventry, promotes the nasal sprays to her 14,000 TikTok followers in exchange for free products. She inhales melanotan every day, and said: ‘I saw videos on TikTok, people promoting them, and that made me want to do them. I thought they’d be great and they’d help me build my tan up.

‘I am addicted to tanning. It is always on my mind. Apart from Christmas, there has not been a day in the last two-and-a-half years that I’ve not been on a sunbed.’

She said she had no idea that selling the sprays was illegal, nor of the serious health risks, but added: ‘Sometimes the spray does hurt – it is just a weird feeling having liquid going up my nostrils.

‘When I first did them I was quite wary, but I thought a lot of people do them now. If I knew there were really bad side effects, then maybe I wouldn’t do it. But I was never told they were so bad.’

TikTok user Madison Sutton (pictured left) gushed about the tanning nasal sprays working without the use of a sunbed, while Hannah Tayy (pictured right) joked about not caring about the risks associated with the products

Personal trainer Katherine Jones, 27, has used nasal sprays daily for four years, but said: ‘I am not worried about my health in relation to the product. Alcohol is legal yet not good for you.’

In an attempt to target the spread of nasal sprays on TikTok, Dr Shotter posted her own video on the platform highlighting the risks.

But she was dismayed by the reaction. She said: ‘I was so shocked by how many comments said things like, “Processed meat causes cancer as well.”

‘Yes, it can, but this is not a competition. This is actually about thinking whether this is a risk worth taking when there are so many great fake tans available.’

The Medicines and Healthcare Products Regulatory Agency said it has been taking ‘appropriate regulatory action’ to remove nasal tanning sprays from the market for the past ten years if they claim health benefits. But it is powerless to act if the only claim is that the product would give you a deeper tan.

Puretan did not respond to a request for comment.