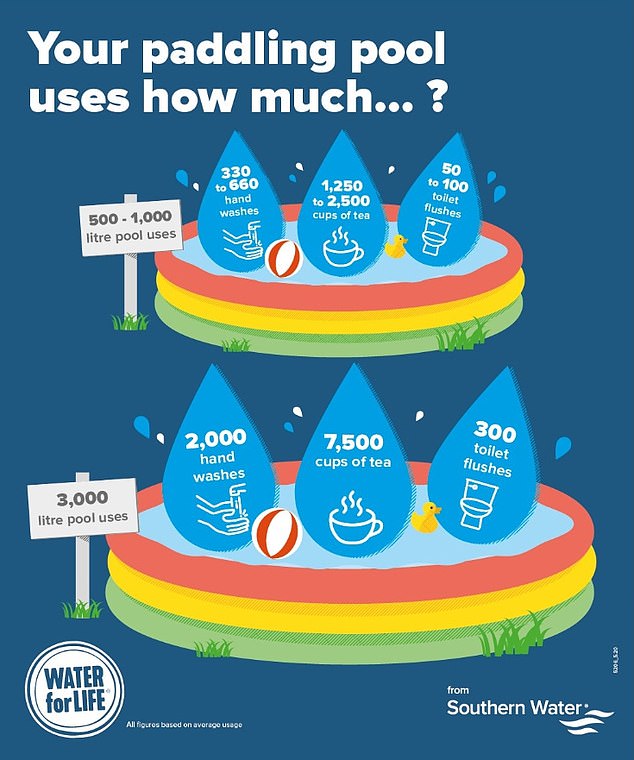 Water bosses have announced a hosepipe ban for Hampshire and the Isle of Wight next Friday after the recent heatwave scorched the UK.

Southern Water said although there was not a risk to their water supplies, the environment has to be protected during ‘one of the driest years on record for over a century’.

The UK saw its hottest day on record with temperatures soaring to 40.3C (104.5F) on 19 July, caused by a plume of hot air from north Africa and the Sahara.

This is the first time the water company have imposed a hosepipe ban since 2012.

It will mean hosepipes cannot be used to water gardens or clean cars and ornamental ponds and swimming pools must not be filled.

People are also banned from cleaning walls or windows of domestic premises, paths, patios, or other artificial outdoor surfaces using a hosepipe.

England has had its driest July in 111 years so far this month, the Met Office revealed today as the UK’s first hosepipe ban of the summer was declared following the driest six months since the landmark drought of 1976.

Figures show that there has just been 15.8mm (0.6in) of rain on average across the country.

The Met Office said that at this stage in the month – up to Tuesday – the country would have expected well over three-quarters of the month’s rain to have already fallen in an average July.

Southern Water have announced a hosepipe ban for Hampshire and the Isle of Wight next Friday after the recent heatwave scorched the UK. The company have shared the impact of water use in paddling pools

Director of risk and compliance at Southern Water, Dr Alison Hoyle, said: ‘We haven’t taken this decision lightly and we know the temporary use ban will have an impact on our customers.

Director of risk and compliance at Southern Water, Dr Alison Hoyle, said: ‘We haven’t taken this decision lightly and we know the temporary use ban will have an impact on our customers.

‘We’re asking everyone in Hampshire and the Isle of Wight to do their bit by supporting these measures and only use the water that they need.

The company added that the temperatures have caused a drought which threatens to damage the habitats of the River Test and River Itchen.

River flows are said to be approximately 25 per cent lower than they should be for July, which is equivalent to losing more than 25 million bathtubs of water.

Southern Water said in a statement: ‘The extremely hot weather and reduced rainfall alongside increased demand has left the water levels significantly lower.

‘We’re asking our customers to help protect our rivers and the habitats that live there by cutting back their water use. We believe a Temporary Use Ban is a responsible and vital step to reducing the amount of water being taken from the Rivers Test and Itchen.’

WHAT IS BANNED IN THE HOSEPIPE BAN?

Watering a garden using a hosepipe

Filling or maintaining a domestic swimming or paddling pool

Drawing water, using a hosepipe, for domestic recreational use

Filling or maintaining a domestic pond using a hosepipe

Filling or maintaining an ornamental fountain

Cleaning walls, or windows, of domestic premises using a hosepipe

As people are being urged to use water wisely in England, latest data showed there has only been 15.8mm (0.6in) of rain averaged across England, just 24 per cent of the amount that would be expected in an average July.

The hosepipe ban comes as the National Fire Chiefs Council warned UK cities earlier this week that they need to prepare for wildfires after dozens of ‘unprecedented’ blazes broke out during last week’s extreme 40C (104F) temperatures.

Parts of the country brace for an official drought that could see schools shut, farmers banned from watering crops and wildlife left at risk.

Beachgoers in Bournemouth watched in horror as a huge blaze broke out on a cliffside above Boscombe Pier and burned through the dry heath on Tuesday which is home to grazing goats – with people urged to avoid the area.

Elsewhere the National Trust said a major fire broke out at Morden Hall Park in South London last weekend which was caused by a disposable barbecue, adding that it had a ‘devastating effect, obliterating the meadow’.

Most of England except for the North West has now moved into a state of ‘prolonged dry weather’, the step before drought is declared, raising the possibility of water companies bringing in restrictions such as hosepipe bans.

England faces drought in August if the hot and dry weather continues, with officials from the National Drought Group discussing a plan of action today on how to cope with the conditions and protect water supplies.

The National Drought Group had a crisis meeting this week where they stopped short of declaring a ‘national state of drought’ in England and Wales.