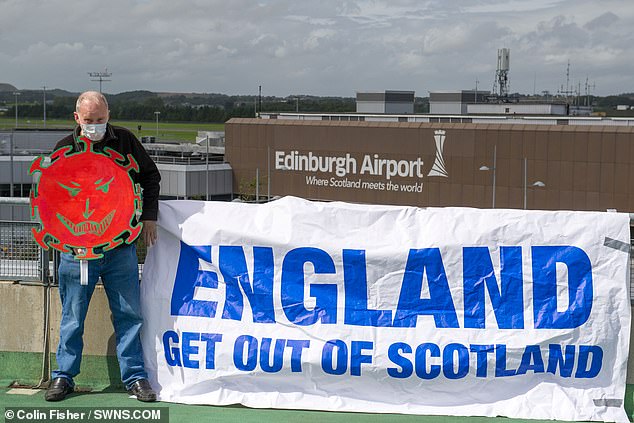 By Laurence Dollimore For Mailonline

A Scottish Nationalist who was arrested for ‘racial remarks’ after unfurling an ‘England get out of Scotland’ banner at Edinburgh Airport has had all charges against him dropped.

Sean Clerkin, 60, staged the protest alongside fellow members of the Action for Scotland group last August as part of a campaign to close the nation’s borders to stop the spread of coronavirus.

The group wanted to discourage tourists entering Scotland at a time when infection rates were much higher in England.

The protestor also posed with the banner at the border, and at Glasgow Central Station, before he was arrested at his home in Barrhead, East Renfrewshire, in September 2020 on suspicion of aggravated breach of the peace.

But Mr Clerkin said he has now been ‘vindicated’ after the Crown Office and Procurator Fiscal Service ruled there was effectively no case against him.

The nationalist branded the ordeal a ‘waste of taxpayer money’ and a ‘malicious prosecution’ when he was informed of the ruling at court on Tuesday.

Sean Clerkin, 60, staged the protest alongside fellow members of the Action for Scotland group last August as part of a campaign to close the nation’s borders to stop the spread of coronavirus (Pictured: Mr Clerkin with ‘offensive’ banner outside Edinburgh Airport)

He said: ‘This has been a waste of taxpayers’ money.

‘I have been taken through the mental wringer.

‘I have waited a year and half with this over my head and I am innocent.

‘I can’t believe they put me through all this only to tell me while at court that the case was dropped.

‘I have gone through months of stress over this.’

Mr Clerkin had argued that the arrest breached his right to protest.

The charge sheet read that he was accused of behaving in a ‘threatening or abusive manner, which was likely to cause a reasonable person to suffer fear or alarm’, as he displayed ‘a banner with offensive and racial remarks, contrary to Section 38/1 of the Criminal Justice and Licensing Scotland Act 2010’.

Mr Clerkin said the banner, which also prompted complaints to police when it was displayed outside Glasgow Central, will no longer be used.

He added: ‘I don’t want to go through all this again. I feel like I have been harassed.’

At the time of the demonstration he said: ‘We are doing the protest to continue our call to the Scottish Government to close the border and all ports of entry for non essential travel from England to Scotland to protect the people of Scotland from Covid-19.’

He told police: ‘It is not against the law to have a banner that someone may disagree with.

‘The first time the banner was displayed was in Edinburgh and a complaint was made to a senior police officer who stated to me that the banner was not offensive and I could continue to display it.

‘That was at the SNP Spring conference in 2019. It said the word ‘England’.

‘It did not stipulate any hate towards the race.’

A Crown Office and Procurator Fiscal Service spokesman said: ‘The Crown has a duty to keep cases under review and after full and careful consideration of the facts and circumstances of the case, the Procurator Fiscal decided that there should be no further proceedings taken at this time.

‘The Crown reserves the right to proceed in the future should further evidence become available.’