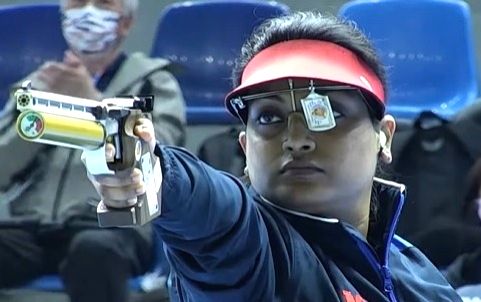 Ruchita shot 16 while Divya only managed to shoot 14 in the selection trials final. Ruchita finished fourth in the qualifiers in the 294-strong field with a score of 576 after the allocated 60-shots.

Divya was seventh with 574 while Maharashtra’s Sakshi Suryavanshi topped with a score of 580. In the semifinal stage, Ruchita topped with 251.1 while Divya was second with 248.7, elevating both to the gold medal shootout. Haryana’s Rhythm Sangwan was fourth with 248.4.

Haryana, however, claimed both the top spots in the Junior Women’s T5 10m Air Pistol with Suruchi defeating Rhythm 17-15 in yet another close final. Suruchi had shot 568 to claim the seventh qualifying spot while Rhythm was second with a score of 579.

In the Youth Women’s 10m Air Pistol T5 category, it was Haryana’s gold once again with Shikha Narwal getting the better of Ch’ndigarh’s Sainyam, 17-9 in the final.