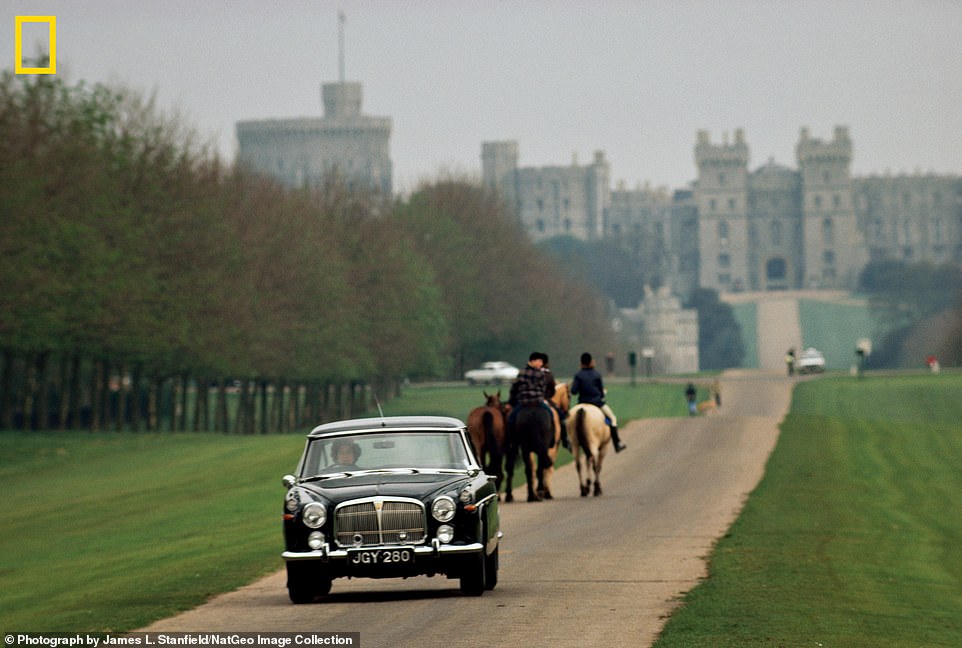 By Keith Griffith For Dailymail.com

Following the death of Queen Elizabeth II on Thursday, National Geographic has released a stunning collection of rarely seen photos from its archives, depicting her across an extraordinary life.

Capturing poignant occasions from across the Queen’s seven-decade reign, the photos depict a range of everyday moments, Royal ceremonies, and state visits.

As the UK enters a period of mourning and the world looks back on the Queen’s legacy, these images capture what King Charles III described as a ‘life of service’.

Queen Elizabeth drives to a Sunday church service at her beloved Windsor Castle in 1979 — though she never had a driver’s license. As sovereign, Elizabeth was the only person in Britain who could legally drive without a license or plates. But she was well-trained as a driver and mechanic with the Royal Auxiliary Territorial Service during World War II, when she drove ambulances, trucks, and other large vehicles

Queen Elizabeth II stands at the steps of St. Paul’s Cathedral as the casket of former Prime Minister Winston Churchill leaves during his funeral in 1965. Churchill was the incumbent prime minister when Elizabeth became queen in 1952, and she went on to have at total of 15 PMs, including Liz Truss whom she appointed on Tuesday

Queen Elizabeth II looks at her oldest son Charles during his Investiture ceremony as the Prince of Wales in Gwynedd, Wales on July 1, 1969. During the reading of the letters patent in Welsh, the Queen invested Charles with the ceremonial girdle, sword, coronet, ring, rod and kingly mantle. Prince Charles then declared: ‘I, Charles, Prince of Wales, do become your liege man of life and limb and of earthly worship, and faith and truth I will bear unto thee, to live and die against all manner of folks’

Queen Elizabeth II receives mementos from various personalities in Bryd Stadium during a Maryland vs. North Carolina football game at College Park, Maryland, on October 19, 1957. The Queen specifically requested to see an American football game during her visit to America

Queen Elizabeth II and her husband, Prince Philip, disembark from a wooden yacht in Suva, Fiji in December 1953, shortly after she became queen. They spent three days in Fiji, then a British colony, as part of a six-month tour of the Commonwealth, the longest Royal tour of her seven-decade reign. Fijian leaders greeted the Queen with silence, a mark of great respect there

Queen Elizabeth II and Prince Charles wave from a balcony to the crowd at his 1969 Investiture as the Prince of Wales at Caernarfon Castle. For centuries, the title has been held by the heir apparent to the British throne, and following the Queen’s death, King Charles III named Prince William the new Prince of Wales

For additional photos from the archives and more on this story, visit National Geographic.