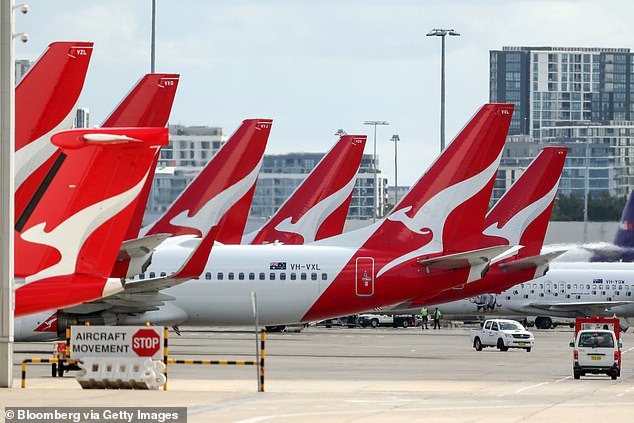 Thousands of Qantas passengers have had their travel plans thrown into disarray by a nationwide computer glitch.

Furious travellers on packed planes were stranded on tarmacs across the country on Sunday night, desperate to get home in time for the working week.

Cabin crew have told passengers the airline is working to fix the technical issue but that flights can’t take off until the system is back up and running.

Many other frustrated travellers were stuck in airport lounges, desperate for answers as to when the would be able to board.

‘Any update on your international computer outage impacting every single flight from departing???? Sitting on fully packed plane on tarmac for 90mins for 2hr is pretty ridiculous!’ one traveller fumed on Twitter.

Another passenger waiting to board added: ‘Well it just gets better from Qantas. They just announced to the whole lounge that there is a ‘nationwide IT issue’ and that everyone should wait in the lounge until further notice. Gulp.’

The computer glitch has also affected Qantas flights across the Tasman trying to take off in New Zealand.

‘Still waiting at 7pm to leave on my Qantas plane from Auckland that was meant to leave at 5.40. Paperwork still has to be signed off,’ one traveller wrote.

Other travellers complained about their weekend plans being thrown into chaos by the glitch.

‘I hate to join the pile-on, but your incapacity to stick even loosely to your schedule has cost me several hours today. Dudes, it’s not that difficult!,’ one woman tweeted.

Qantas has confirmed there was a computer glitch, which has since been resolved.

But the airline has warned of flow on effects which has resulted in delayed flights.

It added at least a dozen flights have been delayed but stressed there have been no cancelations.

The latest unwanted chaos for passengers comes on the back of a tough year for the airline, with travellers reporting long delays, lost luggage and problems with customer service.

Qantas has cut more flights from its schedule as the airline is plagued with industrial disputes, understaffing, poor organisation, cancellations and delays as furious passengers share their horror experiences of travelling with the national carrier.

The news prompted Qantas Domestic and International CEO Andrew David to issue an on-air apology and vow to do better in the future.

Mr David confirmed Qantas had ‘reduced some of our flying this month’ and was ‘planning to do the same next month’ amidst ‘operational pressures’.

Frustrated passengers took to social media to vent their frustration

Airport chaos shows no signs of ending as baggage handlers ramp up threat of strike – with Qantas slamming the move as a ‘terrible, terrible thing’ for travellers

Qantas says striking baggage handlers are doing a ‘terrible, terrible thing’ to Australians after walking off the job over current working conditions.

Employees from the Dubai National Air Travel Agency (dnata), an Emirati business which offers airport services including ground handling, are set to walk off the job after talks over increased pay have stopped.

A damning memo has revealed the safety fears of airport ground crew bosses during the current mayhem, which has seen foreign workers shipped in to help.

The CEO of Qantas Domestic and International Andrew David used the opportunity to lash out at the workers, who he said were betraying the Australian public.

‘We don’t know what action will be taken … but (a strike) will be a terrible, terrible thing if after two years of Australians being locked up and families wanting to see each other and friends and people wanting to travel and business,’ he told Sunrise on Wednesday morning.

The Trade Workers Union (TWU) told Daily Mail Australia the proposed strike was a result of ‘chronically overworked’ crews who were having to hold up the system because of severe understaffing.

A TWU spokesperson said dnata picked up contracts for ground work at Qantas after the airline cut staff, including at Sydney, Melbroune and Brisbane.

‘Chronically overworked ground crew at aviation company dnata will today apply to the Fair Work Commission to hold a vote on strike action over the company’s attempt to push through an agreement that gives pay cuts to experienced workers and below award minimum conditions,’ the spokesperson said.

Qantas say striking baggage handlers are doing a ‘terrible, terrible thing’ to Australians after walking off the job over current working conditions

The TWU claims the laying off of skilled staff for unskilled labour has led to ‘unsafe’ conditions for travellers and the strike was necessary to find a common ground.

‘Ground crew have warned dnata that chronic understaffing, airport chaos and safety incidents will only get worse if the company doesn’t offer secure jobs at higher rates to attract and retain workers,’ a spokesperson said.

‘A recent staff memo from dnata said unsafe behaviour had led to aircraft and equipment damage, telling workers they’re not allowed to use the term ‘under the pump’ when things go wrong.

‘There have been several safety incidents around Qantas aircraft since ground work was outsourced across the country, including belt loaders crashing into planes, locking pins left in landing gear and incorrect weight information given to pilots before take-off.’

The CEO of Qantas Domestic and International Andrew David used the opportunity to lash out at the workers, who he said were betraying the Australian public

A strike among Dnata workers would threaten to bring almost all international air travel to a halt with airlines virtually unable to operate out of Sydney, Melbourne and Brisbane airports.

Mr David dismissed safety fears and said the airline would always put safety first even if it meant flights were delayed as a result – but apologised for the current chaos.

‘We know we’ve got more work to do,’ he told Nine’s Today show.

‘And we haven’t been meeting those standards. I apologise to all your viewers because we are working hard on that.

‘Our cancellation rates are better or getting close to where they were pre-Covid. We know we’ve got more work to do on our on time performance. It is improving.’

Emirates-owned dnata is the third party ground crew firm used by 20 airlines, including Qantas, Etihad and Singapore Airlines, after many axed their own staff during the pandemic.

But dnata has now told their crews to ignore pressure from airline staff to work faster or cut corners after a series of incidents and accidents in the past fortnight.

Handlers buckling to demands to rush their work had caused ‘aircraft damage’ and ‘serious damage’ to ground crew transport, according to the leaked memo to staff.

‘The expression “Under the pump” needs to be removed from our collective vocabulary, especially where it is used to try and explain unsafe behaviours,’ the memo read, as reported by the Daily Telegraph.

Workers claim poor pay and conditions have left airports critically understaffed and the situation won’t improve unless more secure work and better wages are brought in.

The Transport Workers Union is now set to apply to the Fair Work Commission to vote for a strike after talks with management collapsed.

They claim Dnata brought in extra workers from the Philippines to ease the crisis but refused to allow local part-time workers to do extra shifts or create more full-time jobs.

‘Workers successfully knocked back that plan, but are now faced with the likelihood of having to take strike action to achieve fair pay increases and job security.’

Dnata catering staff are also on the verge of separate strike action over pay, which they claim is below award rates for some employees.

There were similar scenes at Sydney Airport on Monday when early morning fog and tech issues saw hundreds forced to queue up outside the terminal.

The airport apologised on Monday and said a technical issue caused one of its security lanes to stop operating.

‘We’re so sorry for the inconvenience. A technical issue has meant we’re temporarily operating one less security lane than normal in T2. We are working with airlines to get everyone on their way, thank you for your patience,’ the airport tweeted.

Travellers said trying to board their flights on Monday was a ‘total nightmare’.

‘Worst security queue I’ve seen in 30 years of travel,’ one tweeted with a photo of a line stretching several hundred metres long.

‘I’ll probably be in the queue to get through security longer than I’m in the air,’ said another.

‘I’m in the car park standing in the line for security check in. I reckon I’m about an hour away from actually getting though. Travel actually sucks,’ a third said.