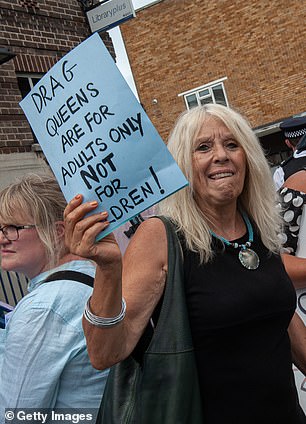 By Chay Quinn For MailOnline

A drag queen story hour saw clashes between opposing groups of protestors – in the latest clash over the controversial events.

The event with drag queen Aida H Dee at Welling Library in south-east London saw the showdown between the factions.

Despite the furore, the event went ahead with Aida H Dee posted a picture of the performer with participants after the fact.

Protestors and counter-protestors clashed outside Welling Library over the event

A protest in support of the Drag Queen Story Hour event at Welling Library on July 30, 2022 in Welling

Drag Queen Story Hour, an established and ticketed children’s entertainment provider, has been faced with disruptive protests as the show tours libraries around England

Mr Samuel is touring Britain across the summer, with almost 70 events in 20 areas of the UK, including Bristol, Cornwall, Oxfordshire and Portsmouth.

The events in Welling are the latest controversy over the tour which has become a culture-war flashpoint.

A protestor was arrested on Thursday amid clashes between opponents and supporters of the tour in Bristol.

Groups both staged demonstrations outside Henleaze Library in Bristol on Thursday, where Mr Samuel was due to read to children at 11am. The event was delayed and then cancelled.

The event attracted large groups protesting and supporting the show – around 15 people staged a demonstration against it and claimed the performer was ‘illegally grooming children’.

One protestor even said they planned to put Aida under citizen’s arrest.

Counter-protestors branded the group ‘fascists’ and said they were standing up for ‘parents, children and drag queens’.

Masked counter-protestors argue with a man outside the library

A supporter defended the children’s story time presented by Aida H Dee saying: ‘None of the content in the stories are sexualised. They are light-hearted and entertaining.’

A video shows a protestor explaining the group’s opposition to the drag queen story hour and claiming they have protest groups ‘all over the country’, mobilised to ‘put an end to this sexual exploitation of children.’

Footage also shows the two groups goading each other and exchanging chants outside the library.

The cancelled event was planned to be part of Aida’s drag story time tour around Bristol. Five others are planned, including one that was set for 2pm today which went ahead.

The second event today at Hillsfield Library was also mobbed by protestors, and attendees had to get through a crowd of them to reach the building.

A large police presence was at the scene and one protestor was arrested – it is not clear which side they were on.

The protest group shouted chants and held signs which said ‘stop grooming kids’, ‘wake up this is child abuse’ and ‘leave the kids alone’.

A spokesperson from the group at Henleaze Library said: ‘Aida works in the sex industry as an adult entertainer.

‘This is grooming and it’s illegal. So we are performing a citizens arrest, if we can’t do it today, we will.’