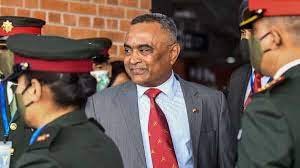 Indian Army Chief Manoj Pande has been conferred on the title of Honorary rank of General of the Nepal Army on Monday.

President Bidya Devi Bhandari honored Pandey with the title amid a function at Sheetal Neewas on Monday.

Nepal and India have been honoring each other’s army chiefs since 1951.

Pande took charge as the Indian Army Chief on April 30 this year. He arrived in Kathmandu on Sunday on a five-day visit to Nepal at the formal invitation of his Nepali counterpart Prabhu Ram Sharma.