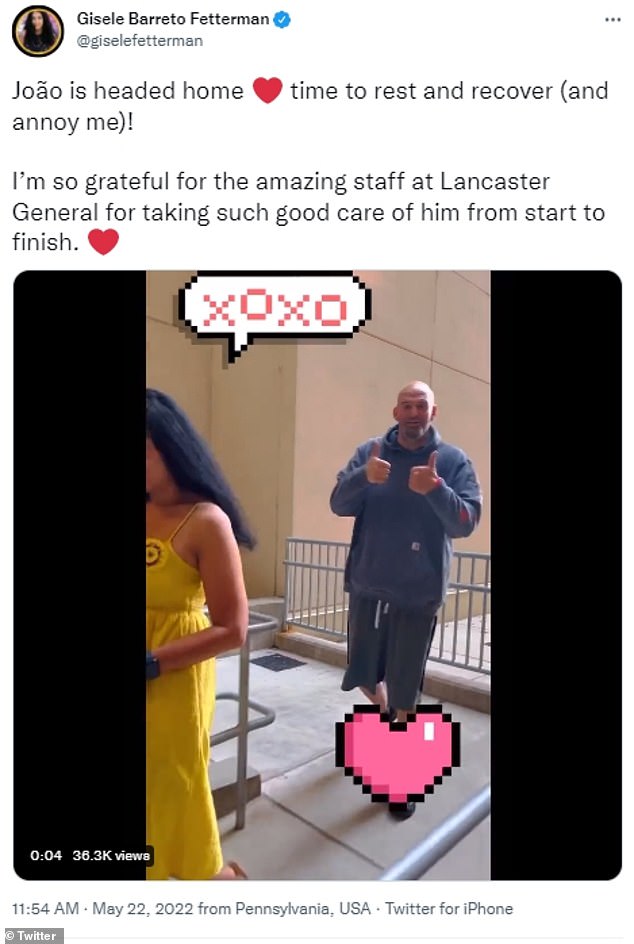 Democratic Pennsylvania Senate candidate John Fetterman was released from the hospital on Sunday after he suffered a stroke just days before his successful primary election.

The progressive populist checked himself into the hospital last Friday and had to have a pacemaker implanted on Election Day – meaning he was absent for his Tuesday night victory party over Rep. Conor Lamb, a moderate.

Meanwhile another Democrat vying for office in the Commonwealth, state Attorney General Josh Shapiro, said on Sunday that he would ‘welcome’ President Joe Biden‘s help campaigning ahead of November’s gubernatorial election.

Shapiro is going to be up against Pennsylvania state Senator Doug Mastriano, who is backed by Donald Trump.

Biden narrowly won the battleground state over Trump in the 2020 presidential election, though multiple crises including rising crime and record inflation have seen the president’s popularity sink to record lows so far during his first term in office.

It’s served to alienate several politicians within Biden’s own party like Texas gubernatorial candidate Beto O’Rourke, who has previously said he has ‘no interest’ in national figures like the president aiding their campaigns.

But when asked about the prospect on CNN’s State of the Union, Shapiro appeared receptive to the possibility.

‘Well, look, he’s from Pennsylvania, and I will welcome him here,’ Shapiro told host Dana Bash.

‘But I’m focused on running a race here in the Commonwealth of Pennsylvania, listening to the people of Washington County, not Washington, D.C.’

Earlier this year, Shapiro was absent from an event Biden held in Pennsylvania touting his infrastructure deal.

At the time he gave no indication of why he missed the president’s visit but wrote on Twitter: ‘I’m looking forward to traveling with POTUS in his home state over the coming months as we fight to move PA forward.’

Fetterman was also expected not to attend but later appeared with Biden in his trademark basketball shorts and hoodie at the site of a bridge that had collapsed just hours before the president’s arrival.

The Pennsylvania lieutenant governor’s victory in the Senate primary was widely seen as voters’ rebuke of the brand of moderate Democratic Party politics normally associated with Biden.

He swept the state primary on Tuesday night with nearly 59 percent of the vote, compared to just over 26 percent for Lamb – who was broadly endorsed by the Democrat establishment.

It’s not clear yet who Fetterman will be facing in November. The GOP primary is still too close to call nearly a week after voters went to the polls, with frontrunners David McCormick and Trump-backed Dr. Mehmet Oz separated by roughly 1,000 ballots as of Sunday afternoon.

Meanwhile his fellow Pennsylvania Democrat, Josh Shapiro, is already being asked to weigh if he wants Biden’s help to face a Trump-backed opponent for the state’s gubernatorial race in November

But it’s clear that Fetterman will be back on the campaign trail – though it’s unclear how soon.

His wife posted a video to Twitter on Sunday afternoon of Fetterman leaving the hospital.

‘João is headed home’ to ‘rest and recover,’ Gisele Fetterman wrote, using the Portuguese translation of his first name.

‘I’m so grateful for the amazing staff at Lancaster General for taking such good care of him from start to finish.’

The candidate released his own statement thanking the medical team that took care of him as well as his supporters.

‘I could not be happier to finally be heading home to my family,’ Fetterman said through his campaign.

‘I am feeling great, but per my doctor’s orders, and Gisele’s orders, I am going to continue to rest and recover.’

He added that he would have a follow up visit with doctors about his recovery ‘later this week.’

‘I am going to take the time I need now to rest and get to 100% so I can go full speed soon and flip this seat blue.’

Fetterman is vying for the Senate seat being vacated by Republican Senator Pat Toomey.