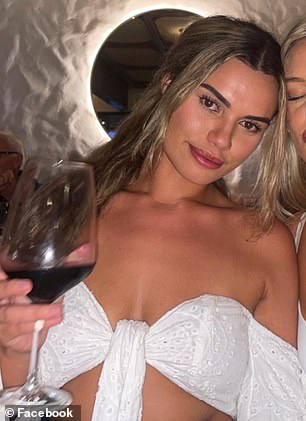 EXCLUSIVE: Double blow for family of Australian tourist, 24, mysteriously found dead in a Balinese villa – as tragic details emerge about why she moved to the holiday island to start a new life

By Brittany Chain and Ben Talintyre For Daily Mail Australia

Olyvia Cowley (pictured), 24, mysteriously passed away in Bali on August 19 – after sharing pictures of her happy holiday online

The grieving family of a young woman who suddenly died in Bali are reeling at the massive cost of bringing her home, as it’s revealed she had no travel insurance because she was looking to start a new life on the holiday isle.

Olyvia Cowley, 24, was found dead last Friday at her villa on the Indonesian paradise island where she was planning to pursue her dream of opening a boutique clothing business.

Investigations into Ms Cowley’s death are still ongoing but it’s understood authorities do not believe her death was suspicious.

A source close to the family told Daily Mail Australia that Ms Cowley travelled to Bali in April and has spent the last four months making preparations for her new business venture.

At the time she was ‘living the life [she’d] always prayed for’.

Daily Mail Australia understands her boyfriend spent a few days visiting her in the week leading to her death.

Now, her devastated family is trying to piece together how Ms Cowley spent her final moments and what ultimately caused her death.

‘The costs of this should not have to be a burden on top of their grieving and brokenness,’ Ms Cowley’s mother’s best friend Tanya Pohio said.

Tributes have since flooded in for the Palm Beach Currumbin High School graduate, with her heartbroken mother, Christina Blakelock, calling her daughter ‘my world’.

She and Olyvia’s stepdad Tony have travelled from Japan to Bali to bring her body back home to Australia.

They will hold a prayer and Christian and Catholic mass on Friday at Olyvia’s ‘last known place of residence’.

‘My twinkle. My baby. My angel. I’ll miss you forever. What a smile, you are someone who lights up the world. It’s hard for me to fathom on days – Jesus chose me to be your Mum,’ Ms Blakelock said in an online tribute to her daughter.

‘You’ll never be loved more. My love for you my dove is beyond anything you’ll ever understand. I need to see your calls and messages again. I can’t imagine life without you.’

‘I’m broken. I now know the pain I never expected to EVER experience. My girl will Reign in my heart forever. Darling my heart does not know what to do…I ache! Miss you like no tomorrow. Oh my baby girl, to hold You again is all I long to do.’

Ms Blakelock said she wanted ‘nothing else more than to be a mum’.

Two separate fundraising appeals have been set up to help cover the costs of repatriation.

‘To ease the financial pressure on the family moving forward I am asking for any donations if you are in a position to give,’ the page read.

‘We all know how much of an impact it can make when a community come together and the Cowley family are extremely grateful for the overwhelming love and support already. Let’s help this amazing family get through these next phases.’

‘In loving memory of one of the most kindest, gentle, funny and loving friends. You brought nothing but happiness to every single person you came across. Rest In Peace Liv,’ one woman wrote.

Ms Cowley reportedly travelled to Bali in April and has spent the last four months making preparations to launch a fashion label. She said at the time she was ‘living the life [she’d] always prayed for’

April 2022: Olyvia Cowley quits her job and buys a one way flight to Bali, with dreams of opening her own clothing store

Early August: Ms Cowley’s boyfriend flies to Bali to visit the 24-year-old for a few days

August 19: Ms Cowley is found unresponsive inside her Balinese villa. She cannot be revived

August 23: Family and friends start the devastating process of trying to repatriate her body

August 25: Olyvia’s parents are in Bali to bring home her body

August 26: It is revealed Olyvia chose not to get travel insurance because ‘she didn’t think she’d need it’