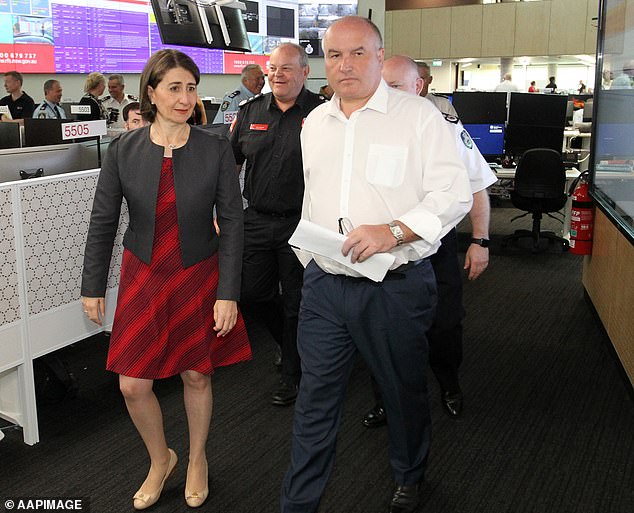 EXCLUSIVE: The tough-talking police minister, a colourful bikie lawyer… and the $54,000-A-YEAR office: The secret documents that could be ‘compromised’ by an ‘extraordinary’ coincidence

Mr Elliott’s office in Baulkham Hills, north-west Sydney is owned by Mark Rumore, an experienced defence lawyer based in Liverpool in the city’s south-west.

Labor said the revelations were ‘highly embarrassing’ for the minister – who talks a tough game against bikie gangs – and questioned whether the office was a safe place for sensitive documents relating to the police.

In 2016 Mr Rumore defended Rebels bikie Chard Achurch, 31, who was jailed for live-baiting greyhounds and handed an extra year behind bars for bashing two men inside Goulburn prison in 2019.

This year he defended Ryan O’Hara – also known as Christian Nassar – who denies 205 charges over an alleged luxury car fraud syndicate and faces trial in 2022.

He also defended Kayley Lee Ketley who was accused of kidnapping a 24-year-old woman in Claymore, south-west Sydney and taking her to Ivan Milat’s former makeshift burial ground last December.

The woman was allegedly stuffed into the boot of her own Holden Commodore and escaped by kicking out the brake light to catch the attention of a passing truckie who called the police.

Mr Rumore told Daily Mail Australia he has never met Mr Elliott or inspected the office because he leaves his business partner Garry Steinberg to manage the property.

The lawyer said he has represented Rebels members on ‘very minor matters’ but has never worked for the group exclusively.

‘If someone from the Nomads or Finks or Hell’s Angels asked me to represent them it wouldn’t matter,’ he said.

‘If they contact me it makes no difference because I have no affiliations. I’m not on a retainer or anything like that.’

Mr Rumore said he hasn’t represented any Rebels members for a while because their activities have been supressed by NSW Police’s gang unit Strike Force Raptor.

He is the director and his co-owner Mr Steinberg is the secretary. Both have held the roles since the company was founded in 2003.

Daily Mail Australia understands Mr Elliott did not know who owned his office because the lease was signed by public servants.

Mr Elliott has built up a reputation for being tough on crime and has frequently denounced bikies gangs in media appearances. Earlier this year he said: ‘I think 99.9 per cent of the population wants these gangs destroyed.’

Shadow Minister for Police Walt Secord said: ‘It is shocking and highly embarrassing for the Police Minister – who is the first to bang the drum and talk tough against outlaw motorcycle gangs.

‘It is clear that Police Minister David Elliott failed to do the most basic due diligence.

‘This is extraordinary. Has the Police Minister put himself into a potentially compromising position?

‘The community has a right to be concerned. Are there sensitive, internal NSW Police documents kept at that office? Is Minister Elliott sure that the office is secured at all times?

‘And has the Police Minister fully disclosed and informed the NSW Police Force of his rental arrangement with the lawyer involved?’

A spokesman for Mr Elliott referred Daily Mail Australia to the NSW Department of Parliamentary Services which signed the lease.