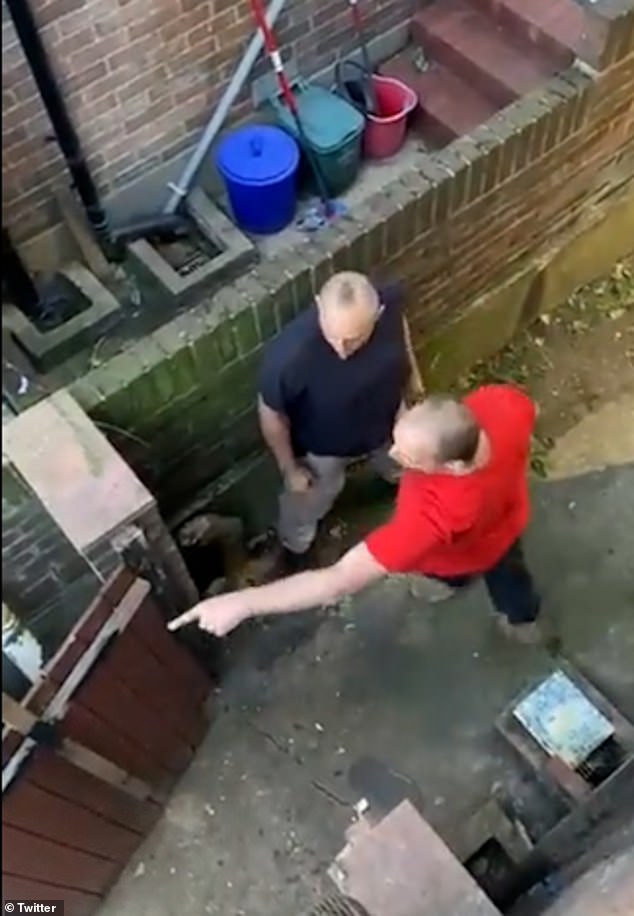 A dispute between two neighbours resulted in a comical brawl after one stuck a black cross on the other’s gate ‘because his family had Covid’.

In a video shared on Twitter, two men from North London, can be seen getting in a fight in the alleyway between their two houses.

Seemingly upset by a black ‘crucifix’-like black cross stuck on his garden gate, the man in the red t-shirt points at the cross shouting ‘you do this s**t again and your f***ed.’

The pair then slap each other before sparring until the man in the red t-shirt crashes into the wall.

He then proceeds to rip his neighbours t-shirt before falling to the ground dramatically.

The wife of the man in the black t-shirt, who was recording the brawl, keeps shouting ‘I’ve got it on camera, I’ve got everything on camera’, while trying to calm the pair down from the upstairs window.

The man in the red t-shirt, who initiated the brawl, points at a cross painted black that had been stuck on his garden fence

Seemingly upset by a black ‘crucifix’-like black cross stuck on his garden gate, the man in the red t-shirt points at the cross shouting ‘you do this s**t again and your f***ed’

She then proceeds to ring the emergency services asking for police and ambulance.

In the video she can be heard saying: ‘Hi there, we need help here.

‘Now the neighbour is down, my husband knocked him down because he came to attack us – I’ve got everything on camera.’

The man in the red shirt lay groaning on the floor for a while before his neighbour, who had pushed him over, is seen walking back to him, asking him if he’s ‘alright’ and then helping him get back up off the ground.

He continues to ask him if he’s alright, patting his chest before helping him back into his house.

Even the dog popped its head out to see what was going on. The man in the red t-shirt lay on the ground groaning for a few minutes before the man in the black t-shirt comes and helps him up before escorting him back to his house

It is unclear what the cause of the fight was but people on social media believe the brawl erupted after the man in the black t-shirt stuck a cross on his neighbours door when he had Covid.

One Twitter user said: ‘Black shirt printed a black cross for Covid-19 because the red shirt and his family have Covid and are out and about without quarantine.’

At the time the video was posted last August, Covid was still rife across the country and there was still a legal requirement to self-isolate.

Another user added: ‘The bloke in the red top didn’t like the crucifix on the other blokes gate.’

The fight continued for more than four minutes, even attracting the attention of a dog who stuck its head out of the window to see what was going on.

The wife spoke frantically to the emergency services begging them to bring an ambulance and ‘some force to hold’ the man in the red t-shirt down’.

She added: ‘Bring an ambulance because the neighbour he’s out of his head he fell down and now he’s just, I think he’s drunk, because he came to attack my husband, he was out of his mind, my husband came down to see what was going on and he started shouting and attacking and now he’s back in his house.’

Those who watched the video on Twitter found it hilarious, particularly enjoying the ongoing commentary from the wife who filmed the incident

One said: ‘Great commentary from the wife. Even the dog had to get a look.’

Another added: ‘Crash bang wallop, what a video’.