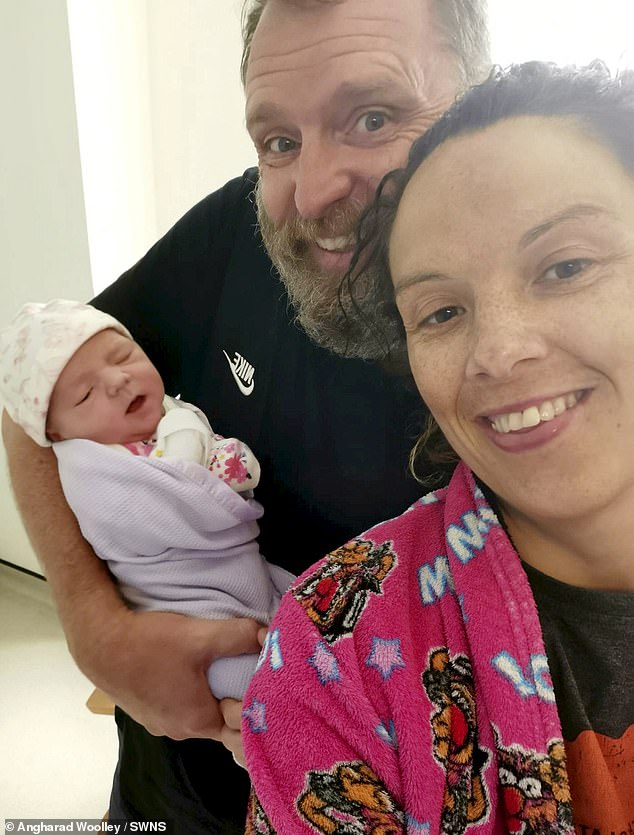 A mother who said she was unable to get induced because there were no beds at her local NHS hospital gave birth at home without medical help or pain relief.

Angharad Woolley gave birth to a healthy baby girl, Esmae, in her living room in the middle of the night with the help of husband Paul.

The 41-year-old, hailed as ‘supermum’ by her proud husband, laboured for just over two hours before giving birth to 7lb and 8oz Esmae 18 minutes before an ambulance crew arrived.

Amgharad was overdue at 40 weeks and four days pregnant and had been waiting for a call from her local NHS hospital, the Queen Alexandra Hospital in Portsmouth, Hampshire, to take her in for an induction.

But she claims they were unable to get an induction as they were told that the maternity ward was full and there were no beds to accommodate her.

The first picture of Esmae Woolley (with parents Angharad and Paul) after being all cleaned up. She was born in a ‘rare’ home birth, with a midwife giving instructions over the phone

An ambulance arrived 18 minutes after Esmae was born. Paul expressed a big thank you to the South Central Ambulance Service for their help

Esmae, who weighed 7lb and 8oz at birth, was overdue but her mother said she was unable to get an induction as there were not enough beds to accommodate her

Angharad, from Cowplain – around five miles from QA Hospital – started having contractions at home at 2.37am, having woken up thinking she needed the toilet.

She said: ‘I was scared.

‘We couldn’t get an induction. We were waiting another week until 42 weeks. We had to wait until she came along naturally.’

Her husband called the NHS Labour Line who asked them to go to hospital, but by the time Angharad reached the car she could already feel the baby coming.

She said: ‘I thought the baby was going to arrive and fall on the concrete outside as we were getting in the car. I came straight back in.’

During the ‘rare’ home birth, a midwife spoke to Paul’s mother Judith – who was also in the living room – in what is called an ‘unassisted birth on arrival’.

While Paul was on the phone to the midwife, he saw baby Esmae’s head ‘pop out’. He said: ‘[Esmae] sort of fell into my hands onto the pillow. My mum dived over and tried to grab her and give her to Aggie.’

Paul’s parents George and Judith were at home during baby Esmae’s unexpected birth as they had been planning to look after her older brother Max. Judith ended up assisting with the birth and was given instructions over the phone by a midwife

Angharad and baby Esmae were taken to the Queen Alexandra Hospital in Portsmouth, Hampshire after the birth. Paul said the lead midwife at the hospital said she had never experienced something like it in her 22 years there

When the ambulance crew arrived 18 minutes later, they were in ‘disbelief’ that the baby had already been delivered – and midwives at QA Hospital were also shocked.

Paul said: ‘When she was wheeled in with the baby, the midwives couldn’t believe it.

‘We told them what happened. The lead midwife who was on that night said she’d been there for 22 years and she’d never experienced that.

‘We want to write a letter to South Central Ambulance Service to say thank you very much for what they did.’

Angharad, who already had a two-year-old son Max with her husband, added: ‘I was so relieved. I just wanted her out and breathing because as you get older you read things about the risks.

Angharad, who was already a mother to Max, 2 (pictured right), said the birth of Esmae on August 20 felt like ‘fate’ as this was the day her late brother should have turned 70

Angharad’s older brother, who died during the pandemic, was due to turn 70 on August 20 – the day Esmae was born. ‘It’s like fate’, she said.

A spokesperson at Portsmouth Hospitals University NHS Trust, in charge of QA Hospital, commented on its care of pregnant patients.

They said: ‘Pregnant people are asked to contact the Labour Line when they believe they are in labour.

‘The Labour Line covers the Hampshire area and will direct people to the nearest hospital that has a maternity bed available.

‘Pregnant people will always be cared for at their nearest hospital where possible, but when there are occasions where a hospital is full, care may be provided at another hospital in the area and further travel may be required.

‘Whilst we do try to accommodate home births where possible, this is always dependent on being able to provide safe care at home and also in the hospital.

‘No pregnant people are turned away from maternity care.’