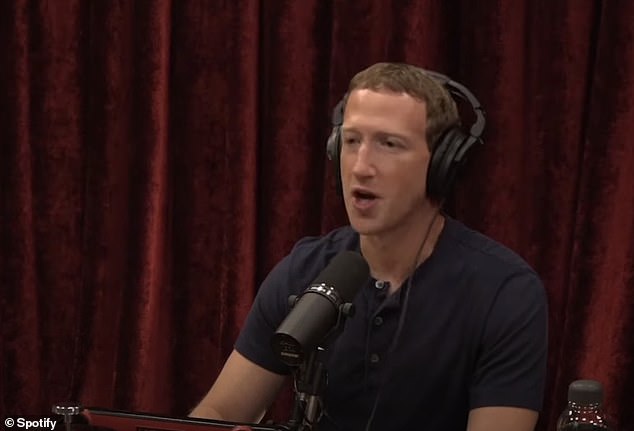 Facebook CEO Mark Zuckerberg has revealed how the platform used an algorithm to suppress the Hunter Biden laptop story when it first surfaced in 2020.

During Thursday’s Joe Rogan Experience Zuckerberg addressed the issue of media censorship and was asked by Rogan how Facebook handles controversial news topics.

Zuckerberg explained how although the platform did not completely block the story like Twitter, it was still pushed down users newsfeeds for as long as a week until more information came down that would indicate whether the story was true or not.

He said the platform decided to limit sharing on the story  but not ban it entirely.

The FBI told Meta employees to be wary of Russian propaganda ahead of the November 2020 election.

That was around the same time the sordid contents of Hunter Biden’s computer were first reported by the New York Post – and censored by Twitter.

At the time, more than 50 former senior intelligence officials signed a letter claiming the laptop story ‘had all the classic earmarks of a Russian information operation.’

Facebook CEO Mark Zuckerberg has revealed how the platform used an algorithm to suppress the Hunter Biden laptop story when it first surfaced in 2020.

During Thursday’s interview, Zuckerberg attempted to shift attention by repeating how Twitter’s prohibited the sharing of the story and locked the Post’s account.

‘So we took a different path than Twitter. Basically the background here is the FBI, I think basically came to us — some folks on our team and was like, ‘Hey, um, just so you know, like, you should be on high alert. There was the — we thought that there was a lot of Russian propaganda in the 2016 election. We have it on notice that basically there’s about to be some kind of dump of — that’s similar to that. So just be vigilant.”

‘So our protocol is different from Twitter’s. What Twitter did is they said ‘You can’t share this at all.’ We didn’t do that,’ Zuckerberg said. ‘If something’s reported to us as potentially, misinformation, important misinformation, we also use this third party fact-checking program, cause we don’t wanna be deciding what’s true and false,’ he continued.

‘I think it was five or seven days when it was basically being determined, whether it was false. The distribution on Facebook was decreased, but people were still allowed to share it. So you could still share it. You could still consume it,’ he said.

Hunter’s laptop included a slew of compromising and X-rated content – including nude, pornographic and drug-related images and videos of the president’s adult son

Hunter Biden has not been charged with wrongdoing, but investigators have been looking into suspected violations of federal gun and tax laws

Rogan then asked Zuckerberg what he meant when using the terms ‘decreased distribution’ to which he explained how it meant the story would appear lower down on people’s newsfeeds.

Rogan asked the percentage of the decrease in distribution.

‘I don’t know off the top of my head, but it’s meaningful,’ he said. ‘But basically, a lot of people were still able to share it. We got a lot of complaints that that was the case.’

‘We weren’t, sort of, as black and white about it as Twitter. We just kind of thought if the FBI, which I still view as a legitimate institution in this country, it’s a very professional law enforcement. They come to us and tell us that we need to be on guard about something. Then I wanna take that seriously,’ Zuckerberg said.

‘Did they specifically say you need to be on guard about that story?’ Rogan asked.

‘I don’t remember if it was that specifically, but it basically fit the pattern,’ Zuckerberg explained.

But Rogan then pushed further asking about the aftermath of suppressing the story which turned out to be factual.

‘Yeah. I mean, it sucks, it turned out after the fact. The fact-checkers looked into it, no one was able to say it was false, right. So basically it had this period where it was getting less distribution,’ Zuckerberg said.

‘I don’t know if the answer would’ve been don’t do anything or don’t have any process. I think the process was pretty reasonable. We still let people share it, but obviously you don’t want situations like that,’ he explained.

Conservatives both during and after the 2020 presidential election criticized Twitter’s censoring of the article.