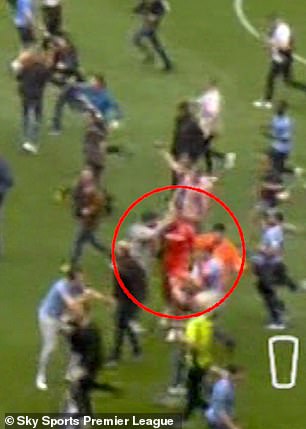 Two football supporters have today been charged after crowd trouble at Manchester City’s title-winning match yesterday as police hunt for the hooligan who smacked Aston Villa’s goalkeeper Robin Olsen around the head.

Ecstatic scenes at the Etihad Stadium were marred by another pitch invasion where a player was assaulted – the fifth outbreak of crowd violence in English football in the past week.

Greater Manchester Police (GMP) today said Phillip Maxwell, 28, of Knowsley, Merseyside, has been charged with throwing a missile (pyrotechnic) on to the pitch and will appear at Manchester and Salford Magistrates’ Court later today.

And Paul Colbridge, 37, of Salford, has been charged with going on to the pitch and will appear at Manchester and Salford Magistrates’ Court on June 7. Both have been bailed ahead of the court appearances, police said.

GMP said the investigation into the assault of Aston Villa’s Robin Olsen by a fan during Sunday’s pitch invasion was ongoing, with no arrests yet.

A police spokesman said: ‘Inquiries into the reported assault of a player on the pitch after the final whistle are ongoing with officers working in partnership with both football clubs.’

Manchester City have promised to issue a lifetime ban to the fan who assaulted Olsen. Thousands of home supporters invaded the Etihad Stadium pitch after City sealed the Premier League title yesterday.

Huddersfield fans run on to the pitch at the John Smith’s Stadium after beating Luton to reach the Championship play-off final. Luton boss Nathan Jones calls some of them ‘an absolute disgrace’ after he and his team are abused and goaded by Terriers supporters.

Thousands of Nottingham Forest fans invade the pitch at the City Ground, following their play-off semi-final win against Sheffield United on penalties. United’s Billy Sharp is headbutted by a Forest fan who is later jailed for assault.

Two Northampton fans run on to the pitch, throw a flare and confront Mansfield Town striker Jordan Bowery during their play-off semi-final defeat at Sixfields.

Everton secure their Premier League status with a comeback win over Crystal Palace. Thousands of fans stream on to the pitch. One approaches and taunts Palace manager Patrick Vieira, who then kicks out at him.

Thousands were on the Etihad Stadium turf after wrapping up the Premier League title and Villa boss Gerrard says goalkeeper Olsen was hurt.

Olsen, who had deputised for Emiliano Martinez, was struck by a fan during a pitch invasion.

The shameful attack follows fans at Nottingham Forest, Port Vale and Everton being investigated after flashpoints with players and coaching staff during pitch invasions over the past week.

Villa said in a statement later that Olsen took a ‘bang on the back of the head’ and is ‘completely fine’.

Asked if his squad made it back inside without any issues, Villa boss Steven Gerrard said: ‘No, my goalkeeper was attacked.

‘I think those questions should go to Manchester City. We’ll go and check if he’s OK now.’

City responded with a statement. ‘The club would like to sincerely apologise to Robin Olsen, who was assaulted after the final whistle when fans entered the pitch,’ it read.

‘The club has launched an immediate investigation and once identified, the individual will be issued an indefinite stadium ban.’

City boss Pep Guardiola added: ‘I’m so sorry on behalf of the club. It is difficult to think why people react in that way. Hopefully we can discover the person and he can be punished.’

Gerrard revealed his frustration at a failure to hang on to a 2-0 lead that would have contributed towards his old club Liverpool lifting the title.

‘I think we did everything well up until the 70th minute,’ he said. ‘The game plan was working for three quarters of the game and I’m slightly disappointed we didn’t play a little bit more football at 2-0 to rest and stay with the ball.’

Sky Sports pundit Gary Neville said: ‘All of a sudden in these last few weeks and months we’ve got these idiots not just running on the pitch, which to be fair is a problem, but actually if you’re attacking players then what the hell are you doing?

‘They’re delirious, they’ve won the league, I get that. But attacking opposition players on the pitch? Where has this come from? It’s absolutely ridiculous.

‘There’s this real sort of threat now and feeling that fans could start to attack people.’

Roy Keane, another Sky pundit, added: ‘It’s disgraceful. It really is. A player or a manager is going to be seriously injured.

‘If you’re mad enough to come on and punch a player then you’re going to be made enough to do something silly like stab a player. There will be something crazy happen.

‘People have come back after Covid and forgotten how to behave themselves. Idiots, scumbags. It’s a disgrace. We’ve seen it at Forest and with Patrick Vieira. It’s absolutely disgraceful.’

City manager Pep Guardiola admitted the incident had been the low point of the day.

‘A footballer was reported to have been assaulted following a pitch invasion at the end of the game, with no injuries reported. Officers are working in partnership with both football clubs to identify those responsible.’

But the Spanish boss then asked fans to leave the pitch to ensure his players could enjoy the celebrations safely and for staff at the Etihad to set up the trophy lifting display.

Guardiola’s side were far from their best and on a tense afternoon and trailed 2-0 with 20-minutes left thanks to goals from Matty Cash and Philippe Coutinho.

Ilkay Gundogan – on his final appearance for City – scored twice and Rodri added another to send the Etihad into raptures.

Thousands of City fans invaded the pitch with banners and flares at the final whistle to celebrate of their title defence after a hard-fought battle with Liverpool who were 3-1 winners over Wolves.

One of the crossbars were broken in the melee and City stars Gundogan and Kevin De Bruyne had to be escorted off the pitch as a cluster of fans approached.

City’s is the latest in a long line of pitch invasions that have have shrouded English football in recent weeks.

Everton fans invaded the turf at Goodison Park on Thursday night with Crystal Palace manager Patrick Vieira goaded – leading to him lashing out at a fan.

Sharp was headbutted and required stitches for a headwound leading to the arrest of a 30-year-old man, who was later jailed for 24 weeks.

The on-field assault on Sharp brought back vivid memories of an attack on Jack Grealish -then of Aston Villa- in a game at bitter rival Birmingham City.

Grealish was knocked to the ground by a supporter who was subsequently jailed for 14 weeks and given a 10-year stadium ban.

The FA said it is ‘very concerned about the rise in anti-social behaviour from fans’.

In a statement on Friday, the FA called on clubs to ‘play a vital role’ and prevent pitch invasions as well as ‘taking their own action’. The FA said it was ‘reviewing our regulations to help stamp this behaviour out and to ensure the safety of everyone inside a stadium’.

The FA added: ‘Football stadiums should always be a safe and enjoyable space for everyone, and these incidents are completely unacceptable and have no place in our game.

‘It is illegal to enter the pitch area in any stadium and these actions are putting players, fans and people who run the game at great risk. This simply cannot continue and we can confirm that we are investigating all of the incidences.’