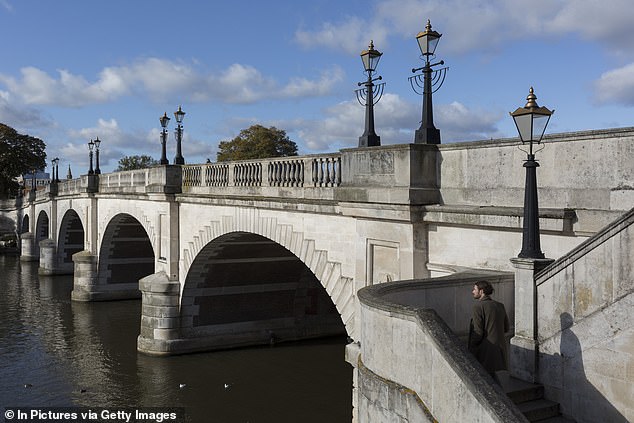 By Rachel Muir For Mailonline

A man in his 20s has died after falling into the River Thames while being arrested by police.

The Met Police said officers were on routine patrol in Kingston-upon-Thames last night when they were alerted to an altercation between a man and a woman.

An allegation of theft was made and officers were in the process of arresting the man when he entered the water.

His body was recovered this morning at around 12.30am but despite the best efforts of paramedics, he was pronounced dead.

The man’s family has been informed and enquiries are ongoing.

Police cordons remain in place around the area near Kingston Bridge.

The full Met Police statement reads: ‘At around 22:30hrs on Friday, 26 August, police on routine patrol were flagged down on Kingston Bridge to a verbal altercation involving a man and a woman who were known to each other.

‘An allegation of theft was made. Officers were in the process of arresting the man, believed to be aged in his 20s, when he entered the water. He had not been placed in handcuffs.

‘The man was recovered from the water at around 00:30hrs and treated by paramedics. Despite their efforts, he was pronounced dead. The man’s family have been informed.

‘Police cordons remains in place and enquiries are ongoing. The Met’s Directorate of Professional Standards have made a referral to the Independent Office for Police Conduct.’