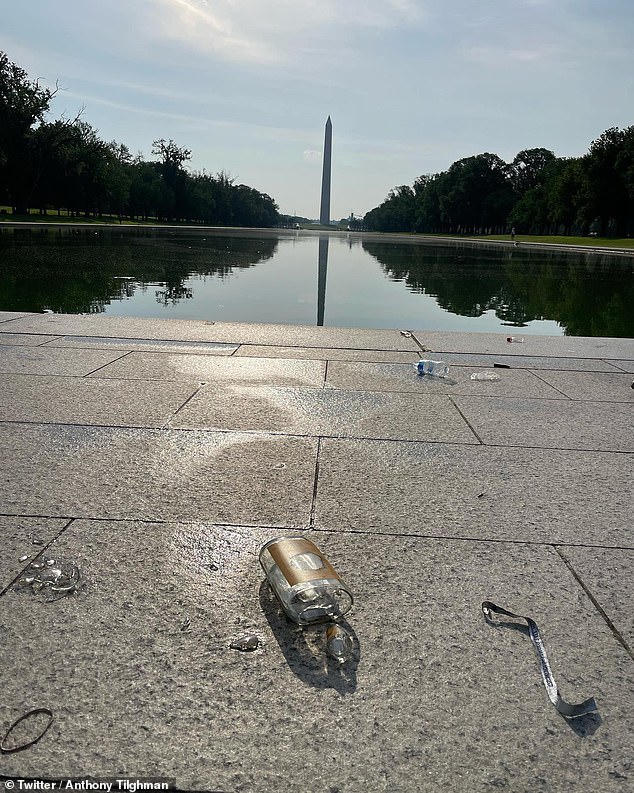 By Alyssa Guzman For Dailymail.Com

The Lincoln Memorial was closed after Georgetown student reportedly held a rowdy graduation party and left the steps littered with broken booze bottles.

The National Mall’s park service announced on Twitter this morning that the iconic Washington Dc memorial was closed after a ‘local university graduation celebration left litter, broken bottles and spilled wine and champagne covering the steps.’

Georgetown hasn’t been confirmed as the college involved, they said they are ‘monitoring’ the situation. It is also reportedly a tradition for its students to head to the memorial to watch the sun rise after their graduation.

It has since been cleaned up and reopened, but the filth sparked fury – especially as the landmark’s 100th birthday celebrations are due to kick-off soon.

Photos posted online show broken liquor bottles, crumpled water bottles, hair ties, and ribbons among the pools of drying liquids as the sun beamed down on the National Mall and the steps of the memorial, which turns 100 years on May 30.

The Lincoln Memorial closed its steps after a ‘local university6’ students – suspected to be from Georgetown – ‘left litter, broken bottles and spilled wine and champagne covering the steps’

The memorial announced on Twitter that it would remove once it was ‘safe,’ and did reopen a few hours later

The park has since reopened after staff cleaned up the trash, a day ahead of the centennial celebrations.

It’s reportedly a tradition for students to watch the sunrise at the memorial the day after graduation.

Although, the park’s service did not say it was Georgetown University students, social has run rampant with rumors the students belonged to the school, which held commencement this weekend.

The school also hosted a senior ball on Friday evening that was only a few miles away from the memorial, according to the National Review. The party went from 9pm to 1am

Georgetown University told DailyMail.com on Saturday: ‘We are monitoring the concerning and disappointing activity at the Lincoln Memorial.

‘While Georgetown is one of several institutions celebrating graduation ceremonies this weekend, we have had no University-sponsored events at or around the Lincoln Memorial.

‘We expect all members of our community to be responsible citizens of our campus and our city and be respectful of the history and institutions of Washington, DC.’

No arrests have been made and it is unclear if police were involved in the incident. Consuming alcohol is illegal on the National Mall.

More Georgetown students continue to graduate throughout the weekend as the law, foreign service, and health school students receive their degrees.