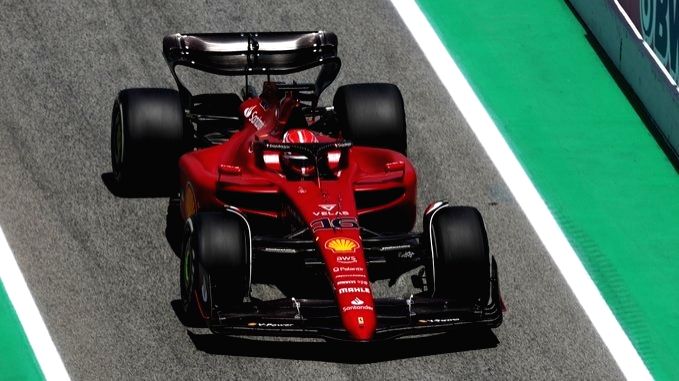 Barcelona, May 20 : Championship leader Ferrari’s Charles Leclerc was quickest in the second practice session for the Spanish Grand Prix ahead of the two Mercedes drivers George Russell and Lewis Hamilton at the Circuit de Barcelona-Catalunya, here on Friday.

The mercury was reading 30 degrees Celsius (with 45 degrees track temperature) as the drivers headed out on track. Unfortunately for Valtteri Bottas, sunbathing looked set to be his main activity in FP2, the Finn managing just two laps before pulling off to the side of the track at Turn 2 after 10 minutes – technical issues once again rearing their head at Alfa Romeo, as a brief Virtual Safety Car period ensued.

Verstappen threw down the early gauntlet with a 1m 20.006s. But as others headed out on a track that had cooled by a degree or two, Leclerc would ultimately set the session benchmark of 1m 19.670s, to complete a clean sweep of best times from Friday in his own upgraded Ferrari F1-75.

Carlos Sainz was fourth, with Max Verstappen fifth quickest in the Red Bull. Sergio Perez, Zhou Guanyu, and Alex Albon all took their cars back for the hour-long session after sitting out the first practice in the afternoon.

Mercedes drivers George Russell and Lewis Hamilton used the soft tyres to move into second and third place in the standings, respectively, which is where they would remain until the chequered flag.

After ending the first session third fastest behind the two Ferraris, Verstappen set the early pace ahead of Sainz and Leclerc, but by less than a tenth of a second from the pair.