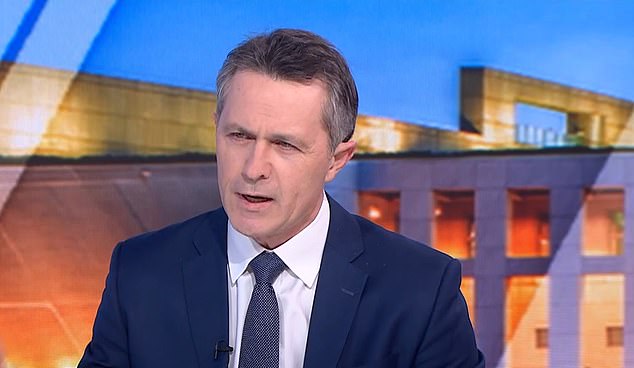 Labor spokesman Jason Clare has defended Anthony Albanese after he was grilled about the Opposition leader’s rolling blunders during the election campaign.

Mr Clare insisted the Labor leader had enjoyed a ‘fantastic campaign’ before turning the attention to a ‘toxic’ Scott Morrison.

‘He’s visited the whole country, setting out our plans for a better future,’ he told Sunrise on Friday.

‘You can see Australians are yearning for change. That Australians have had a gutful of Scott Morrison.’

60 Minutes reporter Michael Usher wondered if Mr Albanese was up to the top job after he made a series of blunders throughout his campaign.

He put the question bluntly to Mr Clare whether it was an indication of the type of prime minister Mr Albanese would be if he was elected.

‘Anthony Albanese has had a few stumbles along the way, some would say not the best campaign for him, is he tired at this point of the campaign, or is this the sort of prime minister we’re going to have?’ he asked.

A fresh opinion poll shows the race has tightened in the final week with the coalition edging higher, confirming the trend see in other vote trackers in previous days.

Labor has a narrow primary vote lead over the government at 36 per cent to 35 per cent, excluding undecided voters, according to the Ipsos poll published in The Australian Financial Review on Friday.

On a two-party preferred basis, Labor is ahead 53 per cent to 47 per cent, after the allocation of preferences based on the last election in 2019.

Mr Albanese is tracking at 42 per cent on the preferred prime minister Ipsos measure, against 39 per cent for Mr Morrison.

But Labor is leaving nothing to chance, even going so far as to project its campaign messages onto prominent buildings in Sydney, Melbourne, Brisbane and Perth on Thursday night.