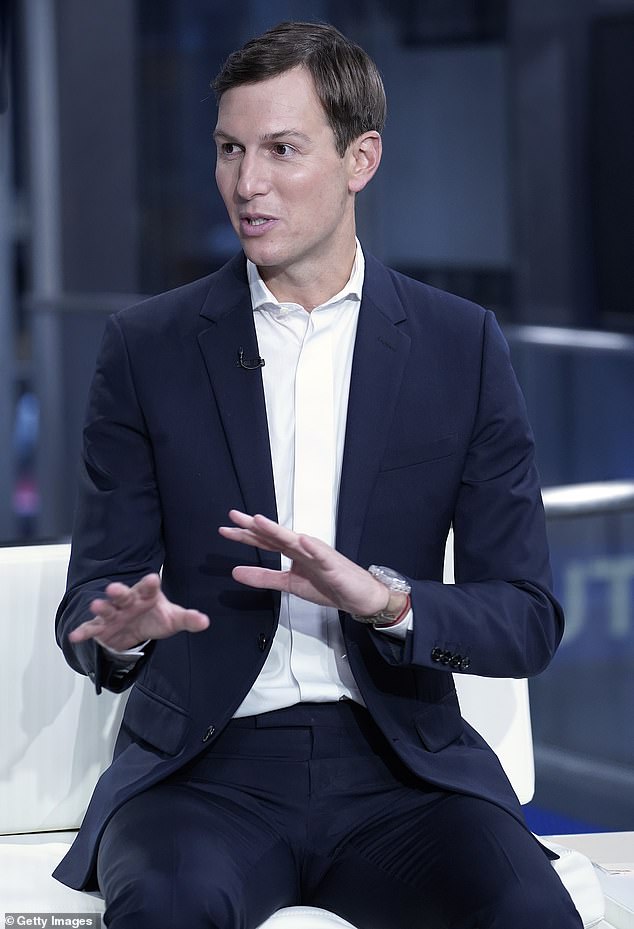 Presidential son-in-law and former presidential advisor Jared Kushner spoke out about his often troubled relationship with ex-chief strategist Steve Bannon, whom he likened to a ‘suicide bomber.’

Kushner, speaking on The Hugh Hewitt Show Friday, said that Bannon ‘blew up’ before father-in-law President Donald Trump fired the former Breitbart chief in 2017, according to Mediaite.

He said: ‘Steve really defeated himself, you know. His head got so big he was just doing all these crazy things, and the ultimately just you know, like a suicide bomber, blew up’.

The former White House senior advisor, 41, referred to Bannon as a ‘cancer’ and a ‘malignant’ figure in his new book, Breaking History, which he spent much of the interview promoting.

Kushner told the president in an excerpt obtained by DailyMail.com that despite their feud, he didn’t oppose a presidential pardon for Bannon, who had been charged with a fraud scheme related to an effort to raise private funds to build the border wall.

Presidential son-in-law and former presidential advisor Jared Kushner spoke out about his often troubled relationship with ex-chief strategist Steve Bannon, whom he likened to a ‘suicide bomber’

Kushner told the president in an excerpt obtained by DailyMail.com that he didn’t oppose a presidential pardon for Bannon, who had been charged with a fraud scheme related to an effort to raise private funds to build the border wall

‘Steve was incredibly destructive to your first year in office, but he was there for you on the first campaign when few were,’ Kushner told the president, he writes.

Hewitt, an occasional Trump skeptic who nonetheless voted for the president, asked Kushner why Trump seemed to be nicer to Bannon than he was to Senate Minority Leader Mitch McConnell, who the 45th president still frequently mocks.

Kushner believes it stems from Bannon’s early support for his father-in-law: ‘I think if you look at Steve … Steve was actually with us very early. He was great on the campaign. He was a great partner when it got to the White House. I think maybe the power got to his head a little bit or he just – it was being more of what he was.’

The Affinity Partners founder added that Bannon was ‘undermining us, knife-fighting with colleagues and it just wasn’t helping us implement the agenda.’

He does note that Bannon is ‘probably right on a lot of issues’ and has now become a great supporter of the president.

Bannon was convicted in July of contempt of Congress for defying a subpoena from the committee investigating the January 6 Capitol riot.

A jury found Bannon, 68, guilty of two misdemeanor counts for refusing to provide testimony or documents to the House of Representatives select committee.

The verdict by the jury of eight men and four women, after less than three hours of deliberations, marked the first successful prosecution for contempt of Congress since 1974, when a judge found G. Gordon Liddy, a conspirator in the Watergate scandal that prompted President Richard Nixon’s resignation, guilty.

His conviction closes a chapter on the stunning rise and fall of a man who seemingly came out of nowhere to lead Donald Trump to the presidency.

Steve Bannon told Jared Kushner ‘I will break you in half. Don’t f*** with me’: Trump’s son-in-law details how ‘toxic’ advisor gave him most problems in White House – but STILL backed him getting a pardon

Jared Kushner’s forthcoming memoir details furious accusations from inside the Trump White House over leaking and Bannon’s threat to ‘break you in half’ if the president’s son-in-law went against him.

But it culminates with Kushner telling the president he didn’t oppose a presidential pardon for Bannon, who had been charged with a fraud scheme related to an effort to raise private funds to build the border wall.

‘Steve was incredibly destructive to your first year in office, but he was there for you on the first campaign when few were,’ Kushner told the president, he writes.

The excerpts, which were obtained by DailyMail.com, are contained in Kushner’s new book, Breaking History: A White House Memoir, which is out next month, and where he labels Bannon a ‘toxic’ presence in the White House.

Bannon became an outsized presence in the Trump White House, where he served as chief strategist with a wide portfolio and where he kept a white board filled with Trump campaign promises while battling people he viewed as ‘globalists’ and swamp creatures.

At one point, Gary Cohn, chair of the president’s Council of Economic Advisors, turned to Kushner for help because ‘Bannon is leaking on me nonstop. I’m not going to take this. I know how to fight dirty.’

Kushner took the matter to Bannon directly, although he acknowledged he should have stayed out of it.

‘Steve, you gotta stop leaking on Gary. We’re trying to build a team here,’ Kushner says he told him.

‘Cohn’s the one leaking on me,’ Bannon shot back, according to Kushner.

‘Jared, right now, you’re the one undermining the president’s agenda,’ Kushner writes, saying Bannon’s eyes were ‘intense and voice escalating into a yell.’

‘If you go against me, I will break you in half. Don’t f***with me,’ Bannon told Kushner, according to the president’s son-in-law

The book recounts internecine battles inside the Trump White House

Happier times. Aide Stephen Miller (r) joked about splitting up Bannon’s leaking responsibilities after he was forced out, according to Kushner

The book’s telling of the clash with Bannon, which was first reported by CNN, was among a series of internecine rivalries that characterized Trump’s term.

Kushner, who kept a low public profile as an unpaid senior advisor to Trump throughout his four years in office, titles a section ‘Thoughts on Bannon,’ who would later come back into Trump’s orbit after being pushed out, start a podcast, and have contacts in a ‘war room’ before Jan. 6th amid Trump’s election overturn effort.

‘The same skills that made Bannon valuable as a fighter during the campaign made him toxic in the White House. Even though he was only with the campaign for the final eighty-eight days, he positioned himself as the keeper of the Trump flame,’ wrote Kushner.

He described the ‘public-relations mess’ when Trump signed an order barring travel to the U.S. from seven Muslim-majority countries. It would immediately lead to chaos at airports and a court fight.

Kushner defended the policy, even as he trashed the way Bannon pushed it through.

‘The seven countries covered by the policy were Muslim-majority, but nothing changed with dozens of other Muslim countries around the world that had better vetting standards and controls in place,’ Kushner writes.

‘At a time when ISIS remained strong, and national security experts were concerned about domestic terrorist attacks, this policy made sense. Yet Bannon bulldozed it through the approval process, keeping it hidden from me and most of the senior staff until the president had already signed the document. The lack of planning caused confusion about how and when federal agencies should implement the travel ban,’ he wrote.

He said the former campaign team was now playing with ‘live ammunition,’ and says he told Bannon staff should keep their ‘heads low,’ as well as ‘take blame for mistakes, and make sure the president received the credit for any success.’

He describes another incident where Trump headed down to Mar-a-Lago, and told Bannon and former chief of staff Reince Priebus not to come.

‘Why are you coming to Florida for the day? I don’t need you there,’ Kushner quotes Trump as saying. He writes that the president then said ‘There was no reason for Sessions to recuse himself, and this is going to unleash a disaster,’ in reference to his first AG’s decision to back away from the Russia probe.

Then, Kushner says he tried to tamp down a New York Times story that Priebus and Bannon ‘were in trouble with the president.’

Minutes later, Bannon phoned him. ‘How f***ing dare you leak on me? If you leak on me, I can leak out on you twenty-eight ways from Sunday,’ Bannon told him, according to Kushner.

He says he pushed back hard. ‘Steve, are you f***ing kidding me? This wasn’t a leak.’ He said he phoned because Priebus had asked him to defend Bannon. He says the two briefly patched things up when Bannon apologized.

Trump himself branded Bannon with the ‘leaker’ label late in his tenure, according to Kushner, who recounts when Trump did so in an Oval Office meeting where he praised then-CIA Director Mike Pompeo, who had phoned in.

‘We couldn’t hear what Pompeo was saying, but at one point the president said to him, ‘You are a star. We have some real stars in this administration,’ writes Kushner. ‘He paused for dramatic effect, looked across the room at Bannon, and then continued, ‘We also have some real losers and leakers as well, but that will change.’

Trump ‘fired’ Bannon on August 18th, Kushner writes, prompting a quip from longtime aide Stephen Miller about splitting up his workload by leaking to three reporters, according to Kushner.

At one point Kushner joked to a close friend about what he had accomplished without any major policy success to show yet. ‘At least I was able to get Steve Bannon fired,’ he quipped. He said it ‘saves the world from immediate disaster.’

Even so, Kushner got behind the Pardon, which came weeks before Bannon and other loyalists helped Trump try to remain in office.

Trump pardoned Bannon and dozens of other people hours before leaving office. He had been charged in August with duping donors into diving funds to ‘We Build the Wall’ and accused of diverting more than $1 million in funds. He denied wrongdoing and hadn’t yet faced trial.

Kushner didn’t raise any substantive issues relating to Bannon’s case. ‘I haven’t reviewed his case, but I don’t oppose him getting a pardon based on our past. You know me. I’m a softy. I err on the side of mercy,’ Kushner told the president.

‘Seriously?’ Trump pressed him, even ‘after everything he did to you?’

‘I don’t forget, but I do forgive,’ Kushner said. ‘If you think it’s a good idea,’ he told his father-in-law.

‘Steve was incredibly destructive to your first year in office, but he was there for you on the first campaign when few were,’ he told the president.

He wrote: ‘He played dirty and dragged me into the mud of the Russia investigation. But now that he was in trouble, I felt like helping him was the right thing to do. I hadn’t forgotten the lesson I learned from my father’s situation. Nothing is achieved from harboring resentment. It’s better to forgive and let God be the judge of the rest,’ he writes, referencing Charles Kushner, who also got a Trump pardon.