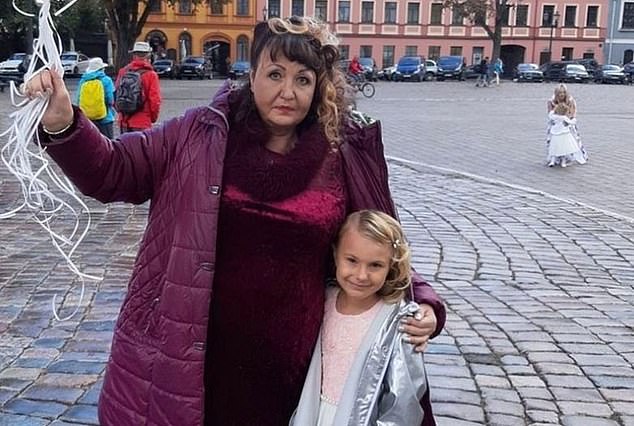 The grandmother of a little girl who died after a stabbing in Lincolnshire last month set fire to a hotel while her relatives were inside — on the night of her daughter’s wedding.

Lilia Valutyte, nine, was killed after being attacked by a knifeman while she was playing in the street with her five-year-old sister in Boston on July 28.

Earlier this month, Lithuanian national Deividas Skebas, 22, was remanded into custody following an appearance at Lincoln Crown Court charged with her murder.

On Saturday, it emerged that he was rushed to hospital after a prison cell attack.

Lilia was found with a stab wound outside her Lithuanian mother Lina Savicke’s embroidery shop, the Sava Code embroidery and screen printing shop, which opened in March.

Her grief-stricken family are fundraising for a statue to be built in her honour.

It has now emerged that Lilia was allegedly in a hotel blaze in September 2019, started by her grandmother Inga Papstaitiene.

Inga Papstaitiene, Lilia’s grandmother, set fire to a hotel while she was inside, back in 2019

The hotel blaze happened on the evening of Lilia’s mother’s wedding, after a row broke out

In June, the 55-year-old grandmother was sentenced to eight years in prison after she was found guilty of arson in a Lithuanian court.

She started the hotel fire after a fight with her daughter Lina Savicke, Lilia’s mother, and her son-in-law Aurelijus Savickas, on their wedding day.

‘Lina’s parents didn’t approve of the wedding to Aurelijus. Her own mother tried to kill Lina and her family. It was awful. And then to have your child killed in front of you … it’s impossible to believe. She has suffered so much,’ Ms Savicke’s friend told The Telegraph.

Papstaitiene denies arson and plans to appeal the sentence next month. She also claimed that her daughter Ms Savicke and son-in-law Mr Savickas attacked her.

She was accused of trying to set fire to the hotel where her mother, daughter, and granddaughter were sleeping.

Lina Savicke, Lilia’s mother, was also in the Lithuanian hotel when it was set ablaze on her wedding night

She started the fire by setting a box of plastic and glass alight and leaving it on a stove — with the gas on — the court was told.

Lilia and everyone in the hotel escaped without harm.

The Telegraph reported that Papstaitiene paid the building owner €500 to not report the fire.

However police began investigating after Lilia’s mother reported it.

Last week the fruit picker accused of killing Lilia was reportedly rushed to hospital after being slashed and battered by a shank-wielding cellmate in a brutal prison attack.

The 22-year-old is understood to have been held at Category A Wakefield Prison, but was the victim of a vicious attack, The Sun reported on Saturday night.

He stayed overnight in hospital before he was returned to his cell the following day.

A source told the newspaper: ‘Skebas was beaten to a pulp and also slashed with a makeshift shank weapon — likely a razor blade in a toothbrush.

Deividas Skebas, 22, pictured leaving Lincoln Crown Court, where he was remanded into custody earlier this month

Lilia Valutyte was found with a stab wound outside her mother’s embroidery shop in Boston, Lincolnshire, where she had been playing with her five-year-old sister

‘People have been plotting against him for a while and on Sunday they got their chance, with a few running into his cell and ambushing him.

‘Guards found him and acted very quickly, and he was taken to hospital by air ambulance. Skebas has had a target on his back since he arrived – and really this attack was only a matter of time.’

Skebas was under constant supervision following his return to prison.

A Prison Service spokesperson said: ‘A prisoner at HMP Wakefield was treated in hospital for injuries following an assault by another prisoner.

‘We are unable to comment further while police investigate.’

Skebas is next due in court for a case for a plea and trial preparation hearing on September 19, when a provisional trial date will be fixed.

Lilia’s death has prompted an outpouring of grief in a town known for its large Eastern European community.

A family friend described Lilia as ‘a nine-year-old angel’ and ‘one of the most beautiful creatures’, adding: ‘None will feel her mother’s pain. The girl was a ray of the sunlight, just like her parents, who were the main helpers of our community and school events. The pain is unspeakable. We are devastated at this shocking news! Rest in peace, little angel.’

Skebas came from the industrial city of Utena in north-east Lithuania, where members of his family still live. A property overlooking Boston’s Central Park was searched by forensic officers over the weekend.

Chief Superintendent Martyn Parker described Lilia’s murder as ‘heartbreaking’, adding that the case ‘has affected many people in Boston, and further afield’.

Ms Savicke said that a memorial for her daughter is a way to keep her presence in the street she grew-up in.

The grief-stricken mother told police: ‘Lilia was grown in that street, every week she spent down there playing, and it happened next to the window.

‘The memorial is a way for her to still be there, and we’re now fundraising to get it.’

Lilia Valutyte (pictured), aged nine, was mercilessly stabbed to death in front of her five-year-old sister on Fountain lane in Boston, Lincolnshire, on July 28, in a murder that shocked the nation

An inquest heard Lilia (pictured with her younger sister Liepa, aged three) died from a single stab wound and was identified by her stepfather

‘She loved to dance, travel and try new things, and annoy her sister. She wanted to go to Italy, so we will probably go anyway next year.’

Her stepfather, Mr Savickas added: ‘She was cheeky; quiet in one way and then other ways she wasn’t. She always tried to make fun.’

Plans for the statue will either incorporate the form of an angel with Lilia’s face or will take her full likeness.

A fundraiser has been set up by a close family friend through a Just Giving appeal. Funeral arrangements have not yet been made.

Ms Savicke said: ‘There are so many things we could say, but we are not going to talk a lot about who she was and share those stories from our home; they are ours and we want to keep them for us.

‘You find yourself looking for her everywhere. We had four corners and now one is gone.’