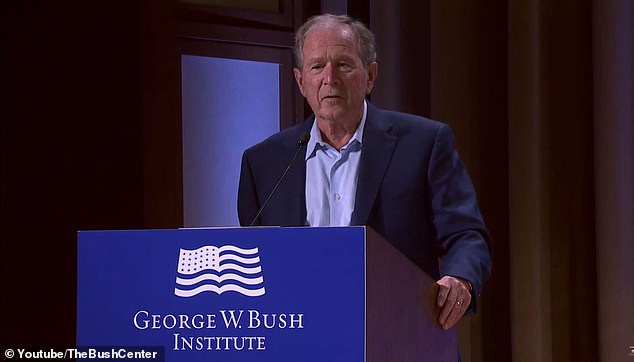 In what some are calling an epic ‘Freudian slip,’ former President George W. Bush accidentally called the invasion of Iraq ‘wholly unjustified and brutal’ while speaking about Russia’s invasion of Ukraine.

Bush made the embarrassing gaffe in a speech at his presidential center in Dallas, where he spoke about the importance of fair elections and slammed Russia’s autocratic system.

‘The result is an absence of checks and balances in Russia, and the decision of one man to launch a wholly unjustified and brutal invasion of Iraq,’ Bush said, before shaking his head and correcting himself. ‘I mean, of Ukraine.’

As the audience fell into awkward silence, Bush muttered under his breath what sounded like the words, ‘Iraq too, anyway,’ drawing laughter from the crowd.

‘I’m 75,’ Bush quickly added, blaming the slip on his advancing years, and drawing further laughter from the crowd.

Critics have called America’s 2003 preemptive invasion of Iraq (above), which Bush ordered, both unjustified and brutal

Critics have called America’s 2003 preemptive invasion of Iraq, which Bush ordered, both unjustified and brutal, and it is widely considered a major stain on his presidency.

The war was premised on claims that Iraqi leader Saddam Hussein had weapons of mass destruction, though no WMD stockpiles or programs were ever discovered.

Claims from the Bush administration that Hussein had an operational relationship with al Qaeda also turned out to be false.

US involvement in the Iraq War dragged out until 2011, and 4,825 coalition troops were killed. Many tens of thousands of Iraqis died as the conflict evolved into an insurgency and bloody civil war.

Bush’s remarks drew immediate mockery from his critics, who rushed to agree with his accidental assessment of the Iraq War.

‘At least he finally admits the Iraq invasion was unjustified,’ one Twitter user wrote.

Bush’s remarks drew immediate mockery from his critics, who rushed to agree with his accidental assessment of the Iraq War

‘Possibly the most significant Fraudian slip of the entire Republican Party’s history,’ another chimed in.

‘Was just wondering how the 20th anniversary of the Iraq invasion would be covered next year. Welp,’ another wrote.

‘An amazing slip-up. Bush conceded for a split-second that the Iraq invasion was completely bogus,’ yet another tweeted.

Bush, speaking at the Wednesday event focused on building trust in elections and democracy, offered his most extensive public remarks yet regarding Russia’s invasion of Ukraine.

He called Ukrainian leader Volodymyr Zelensky a ‘cool little guy’ and ‘the Churchill of the 21st century.’

Bush said that Zelensky, whom he met with virtually earlier this month, had ‘legitimacy’ after winning elections in Ukraine, adding: ‘and now he’s leading his nation heroically against Russian invading forces.’

‘In contrast, Russian elections are rigged. Political opponents are imprisoned or otherwise eliminated,’ he added.

‘The way countries conduct elections is indicative of how their leaders treat their own people, and how nations behave toward other nations,’ said Bush. ‘And nowhere is this on display more clearly than Ukraine.’

‘There’s nothing more important than elections in a democracy,’ he said.

‘It’s really important, and we have an obligation to stay true to our principles by holding free and fair elections,’ said Bush.