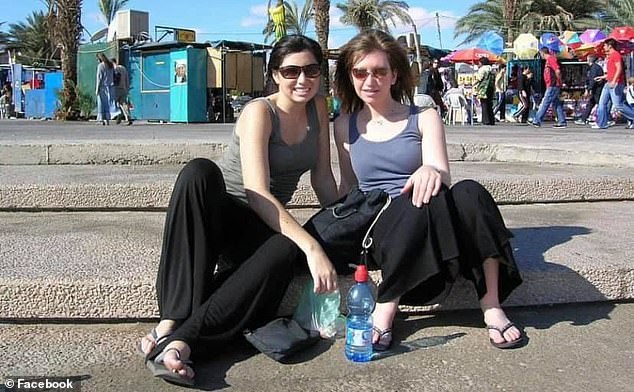 A Philadelphia teacher and bride-to-be whose ‘suicide’ death cops are now re-investigating called her best friend before she was stabbed 20 times.

Alyson Stern, 39, didn’t answer when Ellen Greenberg, 27, tried to call her after being excused early from work due to a blizzard on January 26, 2011.

Hours later, Ellen would be found dead on the kitchen floor of her apartment by her fiancé, Sam Goldberg, with 10 stab wounds to the neck and back of the head and an additional 10 to her stomach, abdomen and chest. A knife was still plunged into her heart.

‘She called me at 1 o’clock that day but I was on the other line and I didn’t pick up,’ Stern told DailyMail.com. ‘I tried to call her back and she didn’t pick up.’

The pair grew up together and were roommates at Penn State. Stern, who had been best friends with Ellen since they were 10, vividly recalled when she got the call she died: She was shoveling snow in her driveway when Sandee Greenberg, Ellen’s mother, phoned.

Ellen Greenberg was found dead in her apartment on January 26, 2011. Cops are reinvestigating the 27-year-old’s death, which had been deemed a suicide

Immediately, Stern thought Sandee was calling to tell her bad news about her husband and his poor health, and to go comfort Ellen.

‘She said that Ellen was dead – and she took her life – because at that point, that’s all Sandee knew.’

When more details of how Ellen allegedly killed herself were released, Stern thought her death suspect, recalling her friend’s behavior a few weeks before her death and knowing something wasn’t right.

Stern had last seen Ellen, who died on a Wednesday, a few days before her death when they had gone dress shopping.

‘We spent that Saturday together bridesmaid dress shopping for my wedding,’ Stern said. ‘I could tell her she was not herself. Even when I picked her up to go dress shopping, she just looked disheveled.

‘She was always fully put together, but her hair wasn’t done and she just wasn’t herself.

‘When we were in the fitting room, she even started crying a little and just like “I’m so sorry, I know I’m not myself. But I’ll get it together.”‘

Stern said she generally would press her friend about what was wrong, but she didn’t on that occasion because it seemed like Ellen didn’t want to make the dress shopping about herself.

PICTURED: Ellen with her fiancé, Sam Goldberg. The pair were set to be married in six months. Goldberg discovered Ellen dead in their apartment

Ellen broke down in tears in front of Stern days before her death. She was reserved and didn’t share much about her troubles

The duo lived together in a luxury Philadelphia apartment. Ellen had asked multiple people to move in with them before she died

Ellen’s behavior began to slowly change around the end of 2010. A few weeks before her death, Stern talked to Ellen on the phone while out shopping at CVS.

She recalled Ellen rambling about how she was stressed and wanted to quit her job and move home. Stern encouraged her to give her job more time and to quit if she was still unhappy by the end of the school year.

‘I knew something wasn’t right other than school,’ Stern said. ‘My father-in-law- worked with her and he said there was nothing for her to be stressed about, they loved her there.’

Ellen was seeing a psychiatrist for anxiety as a deal with her parents. Her father, Josh, told her she could be move home if she got help after her ‘personality shifted.’

She saw a psychologist three times before dying.

As Ellen’s cause of death is being reexamined amid her family claims she was murdered, Stern still mourns her best friend.

‘I can’t believe my best friend is dead and the way I can keep her memory alive is by naming my daughter after her,’ she said.

Her death was initially ruled a homicide before Philadelphia Medical Examiner Marlon Osbourne changed it to suicide.

Her fiancé said on a 911 call in 2011 that she ‘stabbed herself’ and for years police stuck with that assumption.

Goldberg didn’t respond to an inquiry from DailyMail.com.

Ellen’s parents, Joshua and Sandee believe their daughter was killed and have gone to different extents to change her cause of death

Before her death, Ellen told multiple people she was struggling at work and was stressed out. She had seen a psychologist three times

The Greenbergs have spent years fighting to change Ellen’s cause of death from suicide to homicide, and have filed a lawsuit to hold the medical examiner’s office responsible for ‘poorly handling’ the investigation.

Ellen’s family has gone to different measures to seek justice for their daughter.

Like photogrammetry, a new technology unavailable at the time of Ellen’s death, that is able to create a 3D anatomical recreation of a corpse.

This was done with the 20 stab wounds Ellen’s body sustained. The findings concluded that not all the wounds could’ve been self-inflicted, particularly the ones to the back of her neck and head.

In 2019, a pathologist at the Philadelphia Medical Examiner’s Office decided to take a closer look at the only sample of Ellen’s spine with a stab wound.

It was relayed back to the medical examiner that a portion of the spine didn’t show clotting or blood, and the stab most likely occurred after Ellen either had no pulse or was dead.

‘That means that Ellen could not have administered that stab, which means it’s impossible for her to have committed suicide,’ the Greenberg’s’ lawyer, Joe Podraza, told DailyMail.com.

‘Suicide by definition would mean that she would have had to of self-inflicted all of these 20 wounds, and then to top it off, that wound to the spinal cord.

‘Ellen was found with a knife in her chest, so even assuming that the stab into the spinal cord that they had the sample of was the second to last stab – the knife ends on her chest.

‘You’d have to then conclude that Ellen stabbed herself twice when she was dead, which is medically impossible. I think that by itself is enough to say this can’t be a suicide.’

Podraza further analyzed three of the wounds to Ellen’s stomach that should have caused her to pass out instantly.

Additionally, her wounds suggested she was stabbed with another knife that wasn’t found at the scene.

The medical examiner also found evidence of defense wounds on Ellen’s body that weren’t initially acknowledged by investigators in 2011.

Bruises on her arms and legs were healing at different stages. The lawyer also suggested investigators missed trauma that showed strangulation.

Days after her death, a crime scene clean up crew thoroughly wiped down the apartment before investigators were able to analyze further evidence.

A photogrammetry recreating each of Greenberg’s 20 stab wounds was commissioned by the Greenberg family lawyer. Photogrammetry – a new technology which was unavailable at the time of Greenberg’s death – is able to create a 3D anatomical recreation of a corpse

Photogrammetry showed the size, depth, and length of each stab wound, with the creators concluding that all of them could not have been self-inflicted

Now investigators are reviewing evidence from the crime scene that may have been staged to appear as a suicide.

Ellen’s family urged the Philadelphia District Attorney’s Office to re-review the case in 2019, and it was eventually handed off to the Pennsylvania Attorney General before the office got kicked off the case in July.

‘Unfortunately, after four years of work, new expert testimony and information has been publicly alleged but withheld from our investigators, and new accusations of a conflict of interest have been made against our office,’ the Attorney General’s Office said at the time. Now, the Chester District Attorney is diving into the unsolved case.

The Chester County District Attorney’s Office told DailyMail.com that they can’t comment on an ongoing investigation.