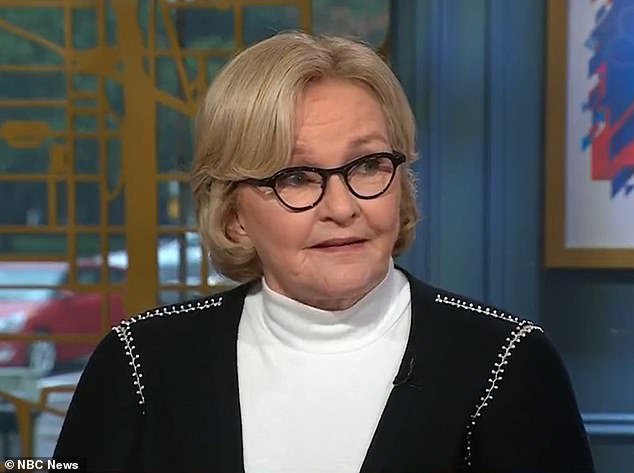 Claire McCaskill said that senators would constantly mock and look down on Joe Biden for being vice president, as the former senator defended Vice President Kamala Harris against ‘premature’ criticism.

She also said that there is a lot of similar chatter dissing Harris, who only served in the upper chamber for less than a term before she was brought on as Biden’s running mate.

‘I remember distinctly being in the Cloak Room in the first two years of the Biden vice presidency, and how many of my colleagues were looking down their noses at Joe Biden. Mocking him,’ McCaskill said during a panel discussion on NBC’s Meet the Press.

‘It’s even harder, I think, if you are a woman in that job, who is seen as an opponent by a lot of the insiders in Washington for the presidency,’ she added in reference to Harris.

WATCH: Fmr. Sen. @clairecmc (D-Mo.) recalls how her colleagues looked down on Joe Biden when he was VP.

“It’s a hard, hard job. … It’s even harder … if you’re a woman in that job, who is seen as an opponent by a lot of the insiders in Washington for the presidency.” pic.twitter.com/cReicz83lf

Comes as the former Missouri senator defended Kamala Harris, claiming criticism against her is ‘premature’. Pictured: The vice president attends the commemoration ceremony for the 21st anniversary of the September 11th terrorist attacks

McCaskill’s defense comes after Harris’ full interview with Todd aired on the network.

The former Democratic senator, who was ousted in 2018 by Trump ally and Republican Senator Josh Hawley, said she felt Harris did ‘a terrific job in the interview’ despite criticism of her attacking the Supreme Court for being an ‘activist’ body.

‘I think she has had a rough road to go,’ McCaskill said. ‘And so there’s a lot of chattering behind the scenes of trying to diss Kamala Harris.’

‘Maybe all this dismissing of Kamala Harris is way premature,’ she added.

Harris launched another attack on the Supreme Court by branding it an ‘activist court’ for overturning Roe v Wade in her pre-recorded interview with Todd, which aired in full on Sunday morning’s Meet the Press program.

Biden became Obama’s No. 2 after 36 years in the Senate. The president delivers remarks at the Pentagon on the anniversary of 9/11

At the same time of its airing, Harris was in New York City at a commemoration ceremony at ground zero for the 21st anniversary of the September 11, 2001 terrorist attacks.

The Vice President laid into the judges during the interview for ‘taking a constitutional right away’ after they put an end to the 49-year law.

Asked how much ‘confidence’ she has in the Supreme Court, the vice president replied: ‘I think that this is an activist court.’

Such harsh words are unusual for a vice president as the Supreme Court fights to maintain public trust.

A clip of her comments regarding the high court aired on Friday, and the full airing came as Biden hasn’t sat down for an interview with the press in more than 210 days.