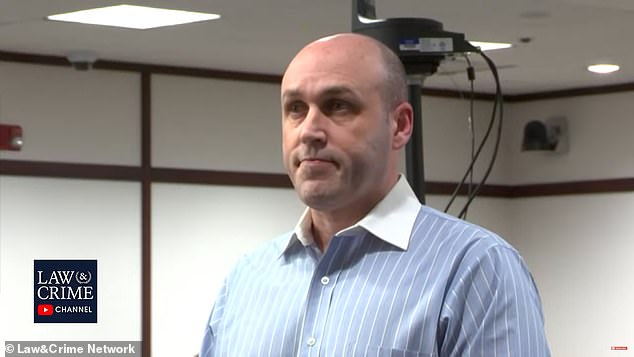 A man accused of kidnapping and raping his ex-wife while holding her hostage for two days during a campaign of abuse has been found guilty of all 11 charges he faced, including attempted murder.

A jury found Trevor Summers, 45, guilty on Friday night following the case in which he acted as his own attorney and was able torment his wife by questioning her on the witness stand. He stood impassively while the verdicts were returned.

Earlier on Friday, Summers went on to decline to testify in his own defense and tried unsuccessfully to have a judge throw the case out.

Summers had previously fired a number of attorneys in the case that dates back to March 2017.

He shot to notoriety earlier this week after he was able to grill his former spouse Alisa Mathewson about the horrific attack he’d inflicted on her five years ago.

On Friday morning, Summers got into a back-and-forth with Judge Christopher C. Sabella about the law, as he attempted to put forward his motion to be acquitted.

Trevor Steven Summers, 45, has been convicted of the attempted murder, kidnapping and the sexual assault of his ex-wife

, Judge Christopher C. SabellaEx-wife Alisa Summers reacts to the verdict as her ex-husband is found guilty on all 11 counts

Judge Christopher C. Sabella asked Summers if he wanted to testify in his own defense but he declined

Summers appeared to show no reaction whatsoever as the verdict was announced on Friday. His wife is seen on the left hand side of the court as the verdicts were returned

While attempting to make his case for acquittal, Summers remarked how ‘sex doesn’t mean that much’ to his ex-wife.

‘I mean, that doesn’t mean it’s someone who is of that position can’t be sexually battered just because sex doesn’t mean that much to her,’ the judge responded.

Earlier in the week, Summers, who represented himself at court in Hillsborough County, Florida, fired a series of questions at his former spouse 42-year-old Alisa Mathewson in a tearful cross-examination.

Mathewson, who had accused him of violence and rape, detailed how Summers, with whom she shares five children, ambushed her in her sleep and raped her after breaking into her home on March 11, 2017.

He then smothered his ex-wife with a pillow until she was unconscious and attempted to strangle her with a rope.

Alisa Mathewson held back her emotions while in the witness box at her husband’s trial earlier this week. She was assaulted and physically abused over the course of two days when he kidnapped her

Trevor Steven Summers, 45, represented himself at the court in Hillsborough County, Florida, and fired a series of questions at his former spouse Alisa Mathewson

She was then physically abused over the course of two days during a kidnapping.

The couple lived in different homes – since they were estranged and in the process of divorcing at the time.

Three of their children were asleep in the house at the time, and their eldest daughter, who was 14, testified how her father tricked her into leaving a window open through which Summers was able to get inside the house.

Summers told how from Tuesday until Wednesday morning one week in March 2017, Summers snuck into her home. Two of her younger children were in bed with her while their 14-year-old daughter was on the couch.

When asked by her ‘abusive’ ex-husband if he forced her to have sex with him, Mathewson told the court: ‘You broke into my home in the middle of the night when I was sleeping, attacked me, and tied me up!’

‘I take that as yes, you threatened me to have sex with you! Yes!’

Holding back her emotions, the ex-wife added: ‘Prior to having sex, you did push me, you did hold me down, you did tie me up, you did attack me, and you did break into my home when I was sleeping! You raped me!’

The defendant then asked: ‘So you’re calling it rape?’

Trevor Steven Summers and his ex-wife in a photo posted to social media in July 2016. He has been found guilty on all 11 counts including  two counts of attempted first-degree murder

Trevor Steven Summers’ mugshot. A slash can be seen on his neck. Summers took a razor blade started slitting his own throat, saying: ‘This is what love is. I’m laying my life down for you. You don’t deserve this,’ he said during the kidnapping

The court heard that Summers used Christmas lights to tie her to the bed frame.

On Wednesday, Summers made a plea to Judge Christopher C. Sabella during the morning break to represent himself during the latter part of the trial – when his defense lawyers would typically be cross-examining the victim.

The judge warned that he did not consider this a ‘wise’ decision – but ultimately conceded to his request. He said Summers could not approach her while she was on the stand.

During the horrifying two-day ordeal in 2017, screaming Mathewson was hogtied and forced into a car, while her ex-husband drove through several counties, the trial heard.

At one point, she says she attempted to escape while he stopped at a Walgreens parking lot, but he forced her back into the vehicle and sliced one of her wrists as punishment.

A Walgreens employee witnessed the ordeal and called 911 at the time.

The ex-wife claims he took her to a field in Manatee County, Florida, to hide from law enforcements – but the Summers ran out of food and water. He was also going to take her on a chartered boat, but he brought her to a ‘safe house’ instead, she said.

Alisa’s dark blue Saturn Outlook, which she was said to have been bundled into during the kidnapping. She briefly tried to escape during a stop at a Walgreens, where an employee testified that he witnessed the ordeal and called 911

Mathewson told the jury at the trial: ‘You broke into my home in the middle of the night when I was sleeping, attacked me, and tied me up!’

After an argument inside the car, Summer then started ‘strangling his ex-wife with a rope,’ but Mathewson was able to get him off, despite having her hands tied.

According to the prosecutor, it was at this moment that the kidnapped ex-wife spotted a cop car.

When he saw the unmarked police car, Summers took the same razor blade he used to slice her wrist and started slitting his own throat, saying: ‘This is what love is. I’m laying my life down for you. You don’t deserve this.’

Mathewson recalled the bloody ordeal – and said she begged the him to stop.

He said he would cut the ropes off her, but she was able to get her hand out of the loop as law enforcement encircled the car.

She testified: ‘And at this point, law enforcement surrounded the vehicle. My door opened. I was grabbed and taken out.’

At the time of the attack, the couple lived in different homes – since they were estranged and and in the process of divorcing