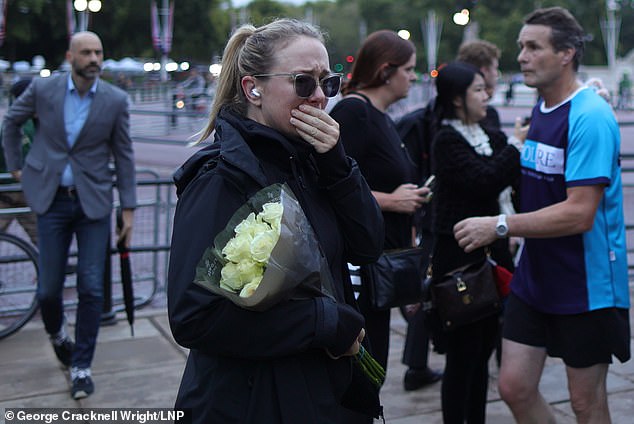 Worshipped as our guiding light in the darkest of nights, the Queen was thought of by millions as Britain’s grandmother.

It is, for this very reason, psychologists believe her death has devastated the hearts of the nation and left many battling an overwhelming sense of grief.

Her death may have also brought back memories of losing loved ones, experts told MailOnline.

Jade Thomas, of the Private Therapy Clinic in London‘s Harley Street, said her death can bring back memories of losing loved ones.

She said: ‘People may be experiencing personal reactions to the passing of the Queen as collective grief can trigger personal bereavement experiences of loved ones, for example parents or grandparents.

‘Individuals have shared that the Queen felt like a mother or grandmother figure to the country and British public.’

Ms Thomas added: ‘We often feel protective over our elderly loved ones and look up to them as they share their knowledge and wisdom of life.

‘This mirrors many feelings individuals may share of Queen Elizabeth II and why her death will trigger so many personal emotions.’

Sharon Jenkins, a bereavement counsellor at Marie Curie, said the collective grief being felt across the country should not come as a surprise.

A police officer reacts as he stands guard in front of Buckingham Palace, following the passing of Britain’s Queen Elizabeth

How to cope with grief

It is important to allow time to take in what has happened, talk about the person who has died and feel the pain and loneliness of their loss.

Time on your own can also help process the grief in the first few days.

Do it your way

There is no right or wrong way to handle grief and everyone does it differently.

You should feel free to react naturally and not feel pressured to respond in ways that others suggest.

Take care of yourself

It can be easy to forget to eat or start drinking too much alcohol after a loss.

But it is important to make sure you take care of yourself and try to maintain normal routines.

You don’t have to go through bereavement alone.

There are lots of ways to get support, whether you prefer to talk to someone in person or join an online community.

Sharon Jenkins, Marie Curie bereavement counsellor, said: ‘If you’re grieving, we’re here to help. Call our Support Line on 0800 090 2309 to speak to a trained member of the team, or book to speak to one later.

She told MailOnline: ‘Although not many of us had met Her Majesty, millions of us will be feeling sad today.

‘Grief is not exclusive to those who knew the deceased personally, and everyone reacts to bereavement in different ways.

‘For some, the Queen was a maternal figure so I imagine that millions of people across the world will be mourning the loss of our matriarch and thinking of their mothers today.’

Mourners have broken down in tears outside the gates of Buckingham Palace and Windsor Castle, as they flocked to pay their tribute to the 96-year-old monarch.

Well-wishers also took to social media to express their grief, admitting they were surprised by the depths of their emotion.

One said: ‘Why am I so affected by the Queen’s death? Honestly cannot stop crying. RIP to the nations grandmother.’

Another wrote: ‘Why am I so emotional over the Queen. Like I’m crying into my coffee.’

Tributes were also paid in the House of Commons, which convened at around midday.

Ex-Prime Minister Boris Johnson, who met the Queen just three days ago, said ‘millions are trying to understand why we are feeling this deep and personal sense of loss’.

Buckingham Palace today announced a period of royal mourning will be observed from now until seven days after the Queen’s funeral.

The Queen’s sudden loss can trigger feelings of a lack of control, anxiety and fear of the unknown, Ms Thomas said.

She said: ‘Remember that grief takes time, grief is often a period of adjustment and as a collective we will be adjusting to a new King.

‘Acknowledge and allow yourself feelings of uncertainty.

‘It can help to share your grief with others, talk with a friend, family member or therapist about how this grief is making you feel.

‘Finally, loss of any kind can provide a different perspective on life and lead us to revaluate what’s important to us. Allow for a time of reflection.’

Ms Jenkins said: ‘On days like today it is important to be kind to yourself. Feeling anxious about change and loss is also part of the normal grief response and eventually it will pass.

‘We are now in a period of national mourning, and some of us will be experiencing collective grief.

‘Remember, it is okay to be sad when someone you don’t know dies and remember everyone experiences grief differently.

‘Some people may want to grieve openly, show their emotions and talk about their losses, and others may not.

‘It may feel like yesterday’s news about the Queen’s death is impossible to escape, all over the news and social media, with the language of loss and visual reminders about death very present.

‘If this is triggering than feel free to disconnect from the news cycle, turn off the tv and log out of social media, opt for a walk to a special place, an afternoon of journaling or an open conversation with friends and family instead.’