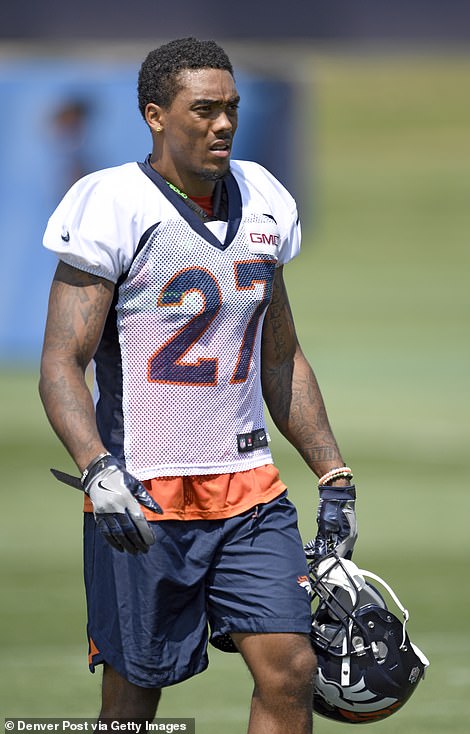 The not-so-friendly skies! Ex-NFL player Brendan Langley, 27, is charged with assault after being filmed in brawl with United Airlines worker

By Jennifer Smith, Chief Reporter and Jack Newman For Dailymail.Com

The United Airlines passenger filmed brawling with an employee at Newark Airport in a viral video is a 27-year-old football player from Georgia who has now been charged with assault.

DailyMail.com can reveal Brendan Langley, 27, was arrested on Thursday May 19 at 11.03am after trading blows with the unnamed United Airlines worker.

Videos show the pair sparring, but almost all of the footage shows the airline worker throwing the first punch.

But Langley, who once played in the NFL for the Denver Broncos but most recently played for the Calgary Stampeders in Canada, was the only one arrested.

He was booked on a single count of simple assault on Thursday. The United Airlines worker was taken to the hospital to be treated for injuries but he was not arrested.

It is believed that the fight began when Langley used a wheelchair to transport his luggage, instead of a paid-for luggage cart which cost $5.

Brendan Langley was arrested at the airport on Thursday for ‘assaulting’ the United Airlines worker. Video of the brawl went viral, right

The United worker managed to land one punch but was then pummeled to the ground, flying behind the check-in desk and onto the carousel.

He staggered back up to his feet, stumbling towards the passenger who yelled incredulously: ‘He wants more? He wants more!’

Other airline workers intervened and the passenger was then removed from the airport by police.

United would not state whether the airline worker has been disciplined for his role in the fight.

In a statement, a spokesman said only: ‘United Airlines does not tolerate violence of any kind at our airports or on board our planes and we are working with local authorities to further investigate this matter.’

Port Authority Police, who handle incidents in the airport, have not commented on the incident or if either man was charged.

The video has been viewed more than 11million times since being uploaded to Twitter yesterday morning.

Now, the internet is divided on which of the pair was to blame – and who threw the first punch.