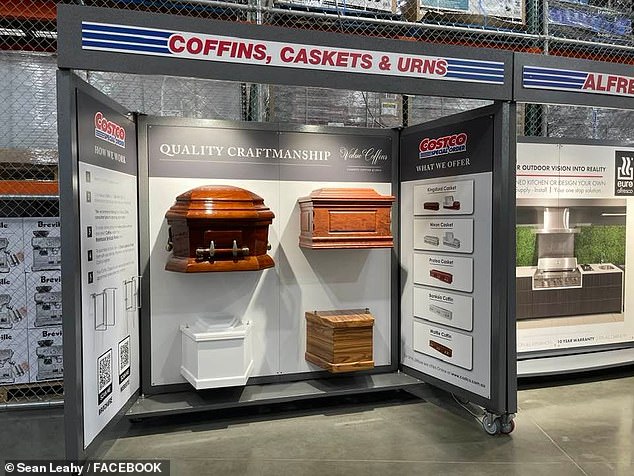 Costco has stunned shoppers by putting up cheap coffins and urns for sale in stores next to the barbecues.

One shopper shared a picture to social media after spotting the display at the North Lakes store near Brisbane.

‘Appropriately you can view this as a last minute impulse buy at the checkout,’ the shopper caption the picture.

The company, founded in the US, is one of the world’s biggest retailers and sells wholesale items at low prices for members who pay a yearly fee.

The picture sparked a flurry of comments with some amused and others saying it was in ‘awful taste’.

‘Economy class, the leg room is a bugger,’ one commenter replied.

‘I did a double-take when I spotted them for sale. Not quite what I expected,’ another added.

‘Do they deliver or do you need to drive away with it strapped to your car roof?’ a third wrote.

The retailer has been selling the items since 2015 in Australia and for years in their American stores.

The display has previously been spotted in Melbourne’s Ringwood store.

There are four stores in Victoria, four in NSW, two in Queensland, and one warehouse in each of Adelaide, Perth and Canberra.

Costco will open its 14th Australian warehouse at Casuarina in Perth in November.