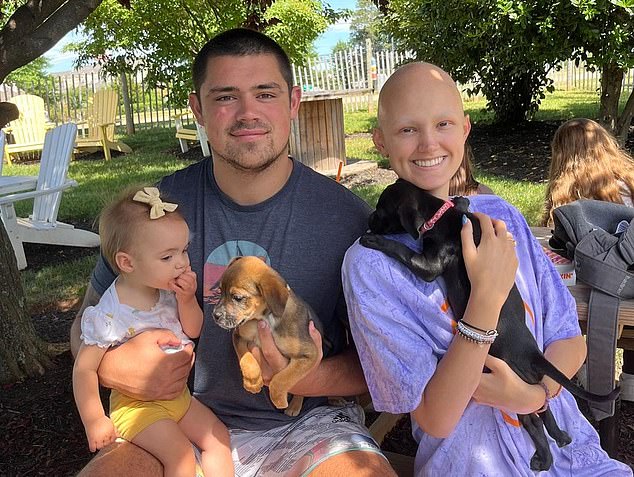 A star football player at Clemson university has revealed his 15-year-old sister has died of brain cancer.

Bryan Bresee, a defensive tackle for the Tigers, said Ella passed away following a months-long battle.

He penned a heartbreaking tribute to the teenager, saying she was a ‘beautiful angel’ who spread ‘happiness to me and so many people’.

Her death came just days after she was honored at the university’s football game, where players and coaches donned ‘Ella Strong’ tops.

Bryan Bresee, a defensive tackle for the Tigers, posted this photo of him holding dogs with his smiling younger sister, Ella, to Instagram on Thursday to announce her death

In his tribute he referred to Ella, who died at the age of 15, as a ‘beautiful angel’ who spread ‘happiness to not only me, but so many people’

Bresee a picture on Instagram of him and Ella with them holding their dogs while smiling at the camera.

He wrote: ‘My beautiful sister Ella, you amazed me every single day with the fight that you put up and how joyful you were constantly through this battle.

‘Never did I think I would be sitting here today saying bye to you,’ he wrote, adding: ‘I want to thank you for bringing happiness to not only me, but so many people.

‘You are the best sister a brother could ask for, and I know for a fact that Heaven has gained a beautiful angel today. Love you forever and always Ella bear.’

Bresee, who is expected to be a first-round pick in the 2023 NFL Draft, will likely sit out of this Saturday’s game against Louisiana Tech

Ella was diagnosed with an aggressive form of brain cancer early last year.

She and the rest of the Bresee family were at South Carolina university for Saturday night’s game, but she became sick on Friday and was taken to a local emergency room, according to Sports Illustrated.

From there, she was airlifted to Washington DC on Saturday morning, and Bresee joined his family following the university’s win against Furman to be by her side.

Bresee is now expected to sit out of Saturday’s game against Louisiana Tech as he continues to mourn his sister.

Ella’s death to brain cancer comes just days after she was honored at the university’s game against Furman University, when players and coaches donned ‘Ella Strong’ t-shirts

Speaking to reporters on Wednesday night, head coach Dabo Swinney said he is not sure when Bresee — who is expected to be a first-round pick in the 2023 NFL Draft — will return to the sport.

‘As I said [Tuesday], there are a lot more important things than football,’ Swinney said. ‘He needs to focus on what he is doing. When he is ready to be back and ready to play, we will be here, but right now, he is where he needs to be.’

And following Ella’s death on Thursday, Swinney issued a statement saying: ‘Our prayers continue to be with the entire Bresee family.

‘We are all so appreciative of all the love and support that has been shown by the Clemson family, and so many others during this time.

‘Ella was such a sweet spirit, and her spirit will continue to live on throughout the Bresee family and everyone who had the opportunity to know her.

‘I am stronger today for having experienced Ella’s strength and courage.’

The official Twitter for Clemson’s football program, meanwhile, wrote: ‘Ella Bresee will continue to be a source of light and strength for this program and the entire Clemson community.

‘Please join us in sending our love and support to Bryan and the Bresee family.’