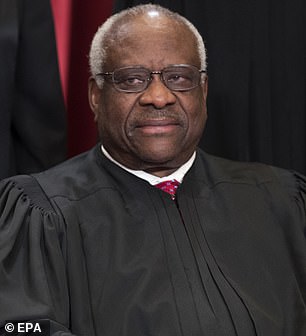 Professor Johnathan Turley, the school’s public law chair, said it was unclear how much an online petition calling for the university to remove Thomas, which gained more than 11,000 signatures, influenced the justice.

But he said ‘the prospect of protests planned for the fall could not have helped in his decision making.’

The petition and backlash against Thomas comes in the wake of protests against conservative supreme court judges following the overturning of Roe v Wade in June.

Turley warned that Thomas’ exit as a lecturer from the school sets a dangerous precedent on thinking differently in higher education.

‘What is clear is that his departure is likely to fuel additional efforts to isolate and stigmatize those with opposing views,’ Turley tweeted hours after Thomas quit.

‘It is only the latest example of how dissenting viewpoints are being systematically eliminated in higher education.’

In a series of tweets hours after Thomas quit, Turley condemned the protests against the justice and warned that Thomas’ exit as a lecturer from the school sets a dangerous precedent on thinking differently in higher education

Thomas has been a lecturer at the school since 2011, and although university officials have stood by him, he has now been removed as faculty from the school’s website.

The justice has not publicly stated his reason for stepping down – and whether he plans to return to it at a later date.

Thomas, a nominee of President George H.W. Bush, was one of the conservative justices who voted to overturn the right to abortion access.

Additionally, Thomas has written his opinion that SCOTUS should revisit other issues such as same-sex marriage and a guaranteed right to contraception.

Following these controversies, a Change.org petition seeking to have Thomas relieved from his role at George Washington law school garnered over 11,000 signatures.

There are only around 1,600 students enrolled in the law school.

The petition accused Thomas and his wife, Ginny, of ‘actively making life unsafe for thousands of students on our campus.’ It says that the overturning of Roe v Wade ‘stripped the right to bodily autonomy of people with wombs.’

The blurb for the petition concludes with the words: ‘Kick Clarence Thomas out of Foggy Bottom.’

The petition demanding that Thomas be fired from the school has more than 11,000 signatures. There are only around 1,600 students enrolled in the law school

Thomas was supposed to lead the seminar with Judge Gregory Maggs of the U.S. Court of Appeals for the Armed Forces. Maggs once served as a Supreme Court clerk to Thomas.

Maggs told the George Washington University newspaper, The Hatchet, on Tuesday that the 74-year-old judge was not going to be teaching at the school this semester.

He said: ‘Unfortunately, I am writing with some sad news: Justice Thomas has informed me that he is unavailable to co-teach the seminar this fall. I know that this is disappointing. I am very sorry.’

The military judge will continue to teach the class solo.

Speaking to the Washington Post, one of the organizers of the petition, John Kay of South Orange, New Jersey, said: ‘This is a massive victory.’

He added: ‘We are going to continue to work to make sure he doesn’t come back in the spring semester.’

In June, GWU aid in a statement that they would be retaining Thomas as a lecturer, despite the outrage over Roe v Wade

In June, GWU aid in a statement that they would be retaining Thomas as a lecturer, despite the outrage over Roe v Wade, reported Politico at the time.  The statement read: ‘Debate is an essential part of our university’s academic and educational mission.’

The school did not that Thomas’ opinions are not reflective of the views of the GWU management or student body.

By comparison, recently retired liberal Justice Stephen Breyer returned to teach at Harvard University without protests or online petitions asking for his removal.

On Sunday, vice chair of the January 6 committee Rep. Liz Cheney confirmed that the panel was ‘fully prepared to contemplate a subpoena’ for Ginny Thomas.

Justice Thomas’ wife is accused of communicating with White House Chief of Staff Mark Meadows on the day of the January 6 riot.

The prospect of the overturning of Roe v Wade became public knowledge in May when Justice Samuel Alito’s opinion leaked expressing his desire to overturn the ruling.

Thomas, a nominee of President George H.W. Bush, was one of the conservative justices who voted to overturn the right to abortion access

Virginia ‘Ginni’ Thomas, wife of Supreme Court Justice Clarence Thomas, arrives to watch Amy Coney Barrett take the Constitutional Oath on the South Lawn of the White House on Monday (left). She is pictured right in 2017

In the fallout from the leak, Thomas told the Old Parkland Conference, meeting of black conservatives, in Dallas: ‘I wonder how long we’re going to have these institutions at the rate we’re undermining them, and then I wonder when they’re gone or destabilized what we will have as a country and I don’t think the prospects are good if we continue to lose them.’

‘You begin to look over your shoulder. It’s like kind of an infidelity – that you can explain it but you can’t undo it,’ reports Politico.

He also hinted that the atmosphere on the court had changed for the worse since he was confirmed in 1991, and suggested that a liberal justice’s clerk could be behind the leak.

Thomas said: ‘This is not the court of that era. I sat with (famously liberal justice) Ruth Ginsburg for almost 30 years and she was actually an easy colleague to deal with… We may have been a dysfunctional family, but we were a family.’

‘Anybody who would, for example, have an attitude to leak documents, that is your general attitude, that is your future on the bench.’

Justice Clarence Thomas was born on the outskirts of Savannah, Georgia in 1948, where was he raised in part by his maternal grandparents

Thomas got his law degree from Yale. After graduation, he said that law firms didn’t take him seriously because they believed his degree was down to affirmative action.

In 1974, Thomas went to work for the Attorney General of Missouri’s office under John Danforth.

Thomas was appointed for a role in the Department of Education by President Ronald Reagan in 1981.

In 1989, President George H.W. Bush nominated Thomas for the court of appeals. He was confirmed in 1990.

Thomas was nominated to the U.S. Supreme Court in July 1991 following the retirement of Justice Thurgood Marshall

Despite sexual assault allegations made against him, Thomas was confirmed to the Supreme Court in 1991.

Since then, Thomas has gained a reputation as one of if not the most conservative member of the court.

Thomas has been married to his second-wife Virginia Lamp since 1987.

Lamp, a conservative activist, attracted controversy in 2022 when it was widely reported that she interacted with President Donald Trump’s Chief of Staff Mark Meadows, encouraging him to push voter fraud conspiracy theories.