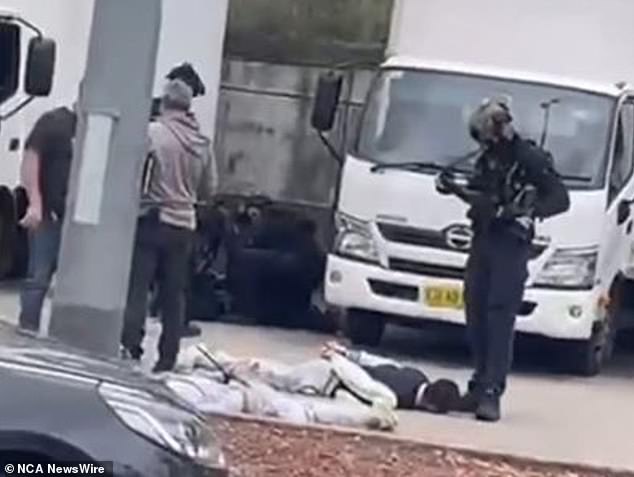 By Duncan Murray For Nca Newswire

Police have charged seven people and seized close to $1 million in cash after a dramatic raid in the carpark of a Sydney Bunnings.

The arrests took place about 11am on Friday, with shocking pictures and video from the scene showing men laying handcuffed on the ground in front of an armed police officer.

Other men were handcuffed against a truck while a swarm of officers collected evidence at the Crossroads Homemaker Centre in Casula.

Eyewitness Vikash Mudaliar told The Liverpool Leader he had watched on as police pounced on the group.

‘There were three bags full of money, drugs and everything,’ Mr Mudaliar said.

A statement from NSW Police late on Friday confirmed officers had seized almost $1 million in cash and arrested more than half a dozen people.

Seven men – aged 45, two aged 49, 46, 37 and 31 – were taken to Campbelltown police station and charged with various drug supply and other criminal offences.

An eighth man was arrested and released without charge.

Some men were seen handcuffed against a truck while other were laid face down on the ground. Picture: Paul Brescia

Seven men – aged 45, two aged 49, 46, 37 and 31 – were taken to Campbelltown police station and charged with various drug supply and other criminal offences

A 46-year-old from West Hoxton was charged with participate criminal group and three counts of knowingly deal with proceeds of crime.

The remaining men were charged with participate in criminal group and two counts of knowingly deal with proceeds of crime.

They were all refused bail to appear before Parramatta Local Court on Saturday.