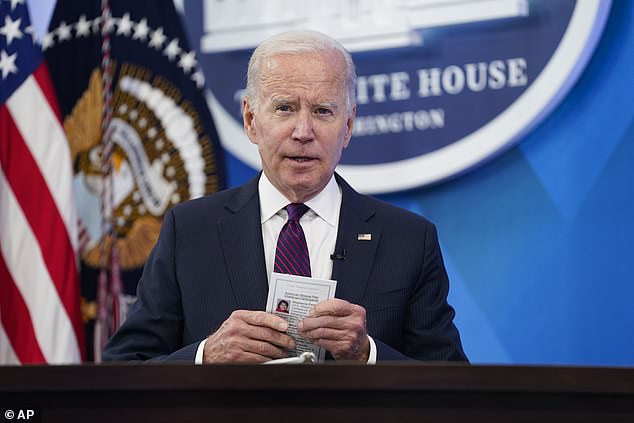 Biden walks back and says he does NOT consider any Trump supporter a ‘threat’ to the country: President slams ‘anyone who calls for violence’ or refuses to acknowledge an election has ‘been won’ after controversial speech

President Joe Biden walked back his attacks on Donald Trump‘s MAGA supporters, saying on Friday he doesn’t consider ‘any Trump supporter a threat to the country.’

‘I don’t consider any Trump supporter a threat to the country. I do think anyone that calls for the use of violence… and refuses to acknowledge when an election was won and insists upon changing the way in which the world votes – that is a threat to democracy,’ the president said at the White House.

It was a contrast to his remarks on Thursday night when he said Trump and his supporters were a threat to the republic.

But Biden toned down his tough talk on Friday, defending supporters of the former president.

President Joe Biden walked back his attacks on Donald Trump’s MAGA supporters, saying on Friday he doesn’t consider ‘any Trump supporter a threat to the country.’

In a speech on Thursday night, Biden said Trump is a ‘threat to the country’ in a speech that contained his harshest rhetoric to date about his predecessor in the Oval Office and the MAGA movement.

‘Equality and democracy are under assault. We do ourselves no favor to pretend otherwise,’ Biden declared at the top of his remarks before Philadelphia’s Independence Hall.

He called out Trump by name, slamming the former president for his false claim the 2020 election was stolen and berating those who support Trump.

‘Donald Trump and the MAGA Republicans represented extremism that threatens the very foundations of our republic,’ Biden said to great applause from his supporters.

He made it clear he doesn’t think every Republican is ‘extreme’ or a threat but said ‘there’s no question that the Republican party today is dominated, driven and intimidated by Donald Trump and the MAGA Republicans.’

‘And that is a threat to this country,’ he said. ‘Too much of what’s happening in our country today is not normal.’

Biden accused Trump and his supporters of trying to thwart free elections, disrespecting the constitution and taking the country backwards in terms of personal rights.

‘MAGA Republicans do not respect the Constitution. They did not believe in the rule of law. They did not recognize the will of the people,’ he said. ‘They refused to accept the results of a free election.’

‘You can’t love your country only when you win,’ Biden said. It was a marked change in tone for Biden, who, previously, rarely mentioned Trump by name, usually calling him ‘the former guy.’

His speech took place right before Labor Day, the traditional kickoff time for political campaign season. But the address to the nation was largely ignored by TV stations, with ABC, CBS, NBC, Fox, PBS, Fox News and Fox Business choosing not to air it live. Only CNN and MSNBC did.