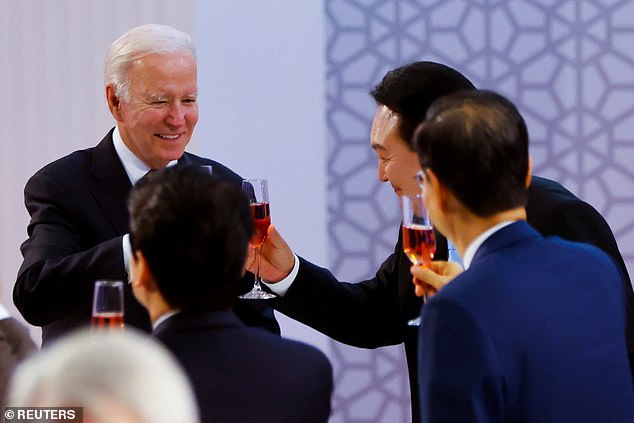 President Joe Biden is pitching for allies Japan and South Korea to do more to assist Ukraine as he meets with leaders of both countries on his trip to Asia – pushing for further support as Ukraine suffers defeat in Mariupol following a long Russian siege.

Populations and leaders in both countries have rallies around the Ukrainian cause, but Biden is using his trip to try to organize further contributions.

‘I think you could expect that at each stop, the President is going to focus on his concerns about Ukraine and the importance he places in providing assistance to Ukraine,’ a senior administration official told DailyMail.com on a press call with reporters on Biden’s trip.

President Joe Biden is stressing support for Ukraine at ‘each stop’ on his trip to Asia. He flies from South Korea to Japan Sunday

The official said Biden has ‘made very clear how impressed he is by what the ROK has done. And the fact that the ROK’s actions, I think, further reinforced to the degree to which key allies in Asia are supporting our efforts and the efforts of the international community in Europe, in the same way that in recent years, European countries have paid much more attention shown much more interest in ensuring peace and stability in the Indo-Pacific,’ the official said.

‘So for I think the President, there’s the idea that these are two different theaters, I think doesn’t make sense anymore. These are there’s very strong linkages between both,’ the official added.

Japan’s Prime Minister Fumio Kishida announced last week that his country would provide an additional $300 million in economic aid to Ukraine, doubling its total to $600 million since Russia’s invasion.

Japan sent a shipment of bulletproof vests, helmets and etc. for Ukraine, JSDF is loading them onto KC-767

The shipment of defensive aid during a raging war was a new step for Japan, which has pacifism enshrined in its constitution

In an aerial view, uninhabitable apartment buildings stand in a former frontline neighborhood on May 21, 2022 in Kharkiv, Ukraine

Two women stand in front of their bombed house in Bakhmut, Ukraine, 20 May 2022

He announced the funds, to be distributed through the World Bank, in advance of Biden’s trip.

As it turns out, a delay in the Senate allowed Biden to showcase U.S. support for Ukraine during his trip, which has otherwise been low on headline-grabbing ‘deliverables’ that administrations usually like to tout during summit meetings.

‘You have something that can be indispensable for us … armored vehicles, anti-aircraft, anti-tank, anti-ship weapons,’ Zelensky said.

South Korea has emphasized its own security situation in turning down Ukraine’s initial request for arms. That posture was underscored this week, as U.S. officials warned North Korea might stage another nuclear or ballistic missile test during or around Biden’s trip.

Both countries have also joined in backing economic sanctions on Russia following the February invasion. Japan did so as a member of the G7 group of industrialized nations.

It’s stand for territorial integrity also has implications in its own neighborhood, where Japan has territorial disputes with China over the Senkaku islands.

South Korea joined international sanctions on Russia, and banned the export of strategic items like chips to Russia.