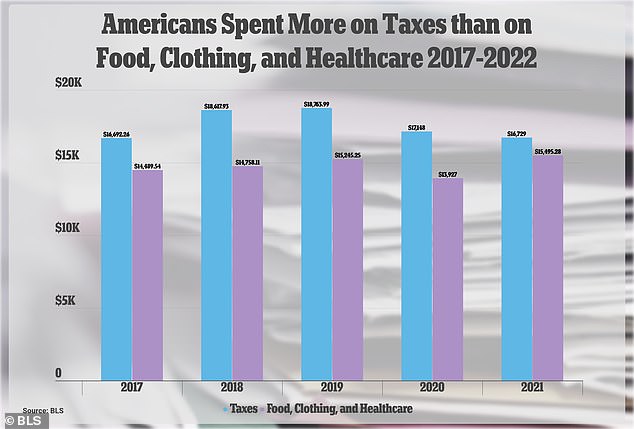 Americans on average spent more of their income on taxes than they did on food, clothing and healthcare combined.

The Bureau of Labor Statistics latest report found that in 2021, Americans spent about $16,700 in taxes to the IRS while only forking over about $15,500 for food, clothing and healthcare.

The BLS recorded the spending costs on an average ‘consumer unit,’  or a financially independent family or individual. In 2021, the agency reported 133,495 consumer units in the US.

Meanwhile, federal and state, social security, property and other taxes totaled $16,729.73, according to the BLS.

The report concludes that the average American consumer failed to keep up with the rising cost of living impacted by rampant inflation that remains persistently high.

It underscores President Joe Biden’s claims earlier this week that his ‘bold and decisive’ action over the past two years has spearheaded ‘significant progress’.

The US has seen negative returns in GDP over the last two quarters, signaling that the nation is already in a recession

A recent Gallup survey found the share of Americans who say inflation is causing them financial hardship has risen from 49 percent in January to 56 percent, with rising prices forcing 69 million households to make cutbacks

A worrying 12 percent of the survey’s 1,570 respondents said they were experiencing ‘severe hardship’ that was lowering their standard of living — a rise on the 9 percent who said so at the start of 2022.

Even though gas prices have fallen to $3.78 per gallon and inflation dipped to 8.5 percent in July, the economy and rising prices remain a top concern for millions of cash-strapped voters heading into November’s midterms.

‘With high inflation persisting for over a year, a majority of Americans now say they are experiencing financial hardship from higher prices,’ said the report.

Poorer householders are more likely than others to be experiencing severe hardship — 26 percent of those whose annual household income is less than $48,000 say prices are seriously hurting their families.

That compares with 12 percent of middle-income Americans and 4 percent of the wealthy.

Reports of financial hardship also differ by party allegiance. Republicans (67 percent) are far more likely than Democrats (44 percent) to say inflation was hurting their households — likely an effect of Democrats controlling the White House and Congress.

In response to rising prices, the cash-strapped are cutting spending on travel, groceries, vacations, gas, and restaurants, as well buying cheaper products and even growing vegetables at home, according to Gallup.