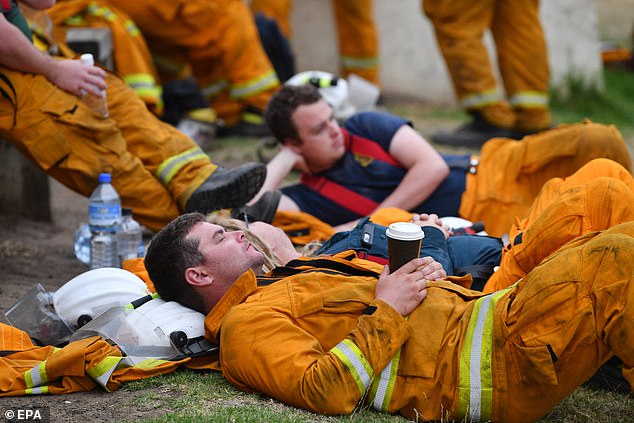 ‘Not a cent’: Millions of dollars raised for firefighters by comedian Celeste Barber during Australia’s devastating 2019 bushfires has failed to reach those who need the money

Bureaucratic wrangling has prevented injured firefighters and families of the fallen from 2019’s Black Summer bushfires from seeing ‘a single cent’ of a $10million fund raised by Aussie comedian Celeste Barber nearly three years ago.

Legal and administrative processes have been blamed for the delay, as detailed at a NSW budget estimates hearing on Friday.

Barber’s online call-out at the height of the raging fires across Australia in 2019 raised $51million for victims.

The money was originally only allowed to be spent by the Rural Fire Service on equipment and training, as per a deed governing the New South Wales RFS trust.

A court later ruled $10million of money raised could also be given to the families of lost firefighters and injured firemen.

Stoic Aussie firefighters (pictured) injured in the Black Summer bushfires are yet to see the proceeds of a donation drive set up by Celeste Barber, as detailed at a NSW budget estimates hearing on Friday

Celeste Barber (pictured) raised more than $51million for the Rural Fire Service in donations after a call-out at the height of the bushfires, but trust legalities have meant less money will reach the families of fire crews and volunteers affected by the fires

The RFS set aside the sum in a fund specifically for firefighter victims and their families.

On Friday NSW government budget estimates heard that despite the deaths of four volunteers and the injuring of 860 firefighters during the 2019 and 2022 summer, none of the money had moved from the fund.

State Labor MPs grilled the then-Minister for Resilience Steph Cooke, asking her why, in nearly three years, ‘not a cent’ of the millions had reached those who needed it.

Australia’s harrowing Black Summer bushfires saw more than 800 RFS firefighters injured and four volunteers die (Pictured, Fire and Rescue crews battle to save their truck from a raging fire at Bilpin, NSW in 2019)

‘We will continue to work on its establishment and the distribution of funds,’ Ms Cooke said.

‘It’s important that we set this fund up correctly right from the get go.’

Labor MP Mark Buttigieg said it wasn’t acceptable the fund had taken so long to form.

‘We are now in August 2022, two-and-a-half years after the fund was approved, and not a single cent has gone to those families,’ he said.

‘You’ve got deaths, you’ve got injuries, you’ve got a woman who has gone out of her way to raise $51 million, $10 million of it which was hypothecated to the families, and we’ve had not one single cent gone to those families.

‘Have we only just got the governance in place for this fund?’

RFS Commissioner Rob Rogers said he wanted the fund to be looking after volunteers for years to come, planning a Police Legacy style ‘Benevolent Fund’.

The state government is hoping the fund will be established by the end of the year.

The RFS Commissioner Rob Rogers is hoping to set up a fund in the style of Police Legacy to support firefighting victims in the future (Pictured, 2019’s fires in Batlow, NSW)